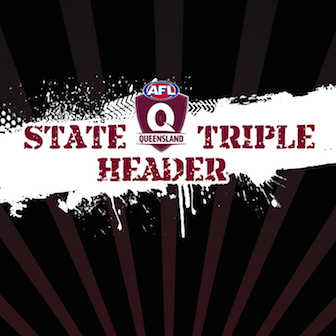 The best of Queensland’s female football talent was on show in the Women’s All-Star match at Burpengary.

Both teams laid some incredible defensive pressure on, making it difficult to get away.

However, it was the attacking spark that allowed some of the players to show their most exciting attributes, under the watchful eyes of the state selectors.

The Lions kicked straight early, with four goals straight, before their first behind came in the second term.

Experienced campaigners, like Nat Thomas and Heidi Thompson, were impressive in the Lions colours, but the performances of some of the younger women were just as strong.

For the SUNS, 2013 Queensland representative Sharni Webb did no harm to her state chances, playing in the ruck and on the ball, a key player in her side’s rebounding efforts.

Courtney Daniec (SUNS) and Hannah Sexton (Lions), were teammates in the youth girls state team, and were impressive for their respective teams on Sunday.

Teegan Stevenson was the only multiple goal kicker of the match, with two goals for the Lions.

Luana Healey kicked the one goal of that term for the SUNS, setting up a cracking final quarter.

And that last term delivered, with a flurry of goals from both sides in an open, attacking style.

The Lions slotted three of those, courtesy of Anna O’Keeffe, Jenna Vandyk and Tayla Harris, sealing the game.

The ioutstanding performances from plenty of the players gave state selectors plenty to think about.

Twenty-four women will be selected from today’s match to represent Queensland in a historic standalone women’s state match, against Tasmania, on June 21.