Lions and SUNS ready for QClash5 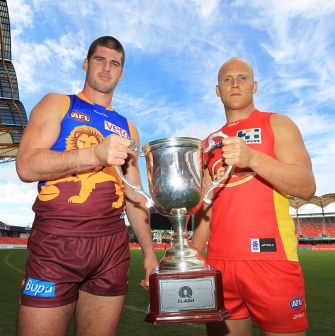 Tomorrow’s QClash is shaping up to be one of the best yet.

Saturday’s QClash5 is set to be the biggest one yet.

After the Gold Coast SUNS took out the first Sunshine State derby, the next three went Brisbane’s way and the Lions are again favourites this weekend.

However, there are plenty of reasons for SUNS fans to be feeling optimistic heading into the match, with their side a game up on the Lions in 2013.

Lions co-captain Jonathan Brown said there would be plenty of focus on gun midfielder Daniel Rich, who has been stifled in Brisbane’s opening two games.

“Even if he’s not being tagged, we need the ball in his hands,” Brown said.

“We’ve got to go out of their way to get the ball in Daniel Rich’s hands because he’s probably our main offensive weapon and he’s probably the best kick in the team.”

With the Suns sitting on a 1-1 record, Suns captain Gary Ablett said his side would be focused on building upon their strong start.

“I think you go out to win any match,” Ablett said.

“There’s no doubt we’re a lot fitter and stronger than we have been in previous years and obviously that…is going to help us out a lot going into this game .”

There is added significance to the game for the Queensland players on the list, able to play a local derby in their home state.

One of those players is Lions midfielder Dayne Zorko, who made an immediate impact in Brisbane last season after being drafted at 22.

Zorko, who played juniors at Surfers Paradise and captained Broadbeach in the NEAFL, said the opportunity to play a local derby in his home state meant a great deal to him.

“It means a lot more [to play in a game like this] just coming through the junior ranks…and to get drafted by a Queensland club,” he said.

Zorko said the rivalry between the two Queensland clubs was growing stronger with each match.

“The motivation every time we play them is we want to be the best side in Queensland so I think that rivalry is going to be a really strong one for a long time,” he said.

It’s been a mixed week for the Lions, with young midfielder Claye Beams’ season after after rupturing his ACL, while first-year draftee Sam Mayes will line up for his debut in the clash.

QClash5 kicks off tomorrow at 7:40pm at Metricon Stadium.

Tickets are available from the gate or online at  http://ticketmaster.com.au/suns.