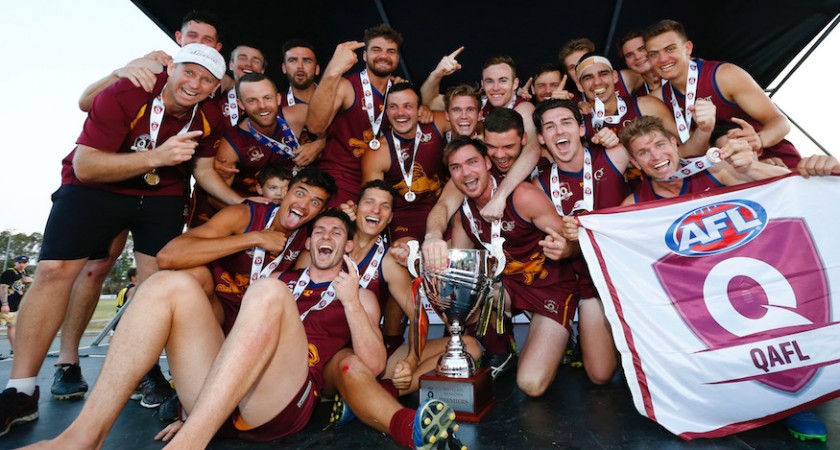 The Lions put the pressure on early, tackling with ferociousness and causing the Tigers to turn the ball over.

Palm Beach’s speed became a factor as the game wore on and the mighty Labrador defence failed to keep up, as the Lions moved the footy with blistering speed and supplied their forwards with silver service.

“No words do justice to the team of players we had out there today,” said Palm Beach Currumbin coach Chad Owens.

“It was about a team effort today, no one flinched, not one of our boys flinched.”

Jake Dignan won the Joe Grant medal for the best player on the ground with a stellar midfield effort.

Dignan was impressive around the footy, along with joint Grogan winner Jason Burge, as the Lions handed the Tigers their second defeat of the season. The duo both collected over twenty disposals and wreaked havoc by foot.

“Digs (Dignan) is a superstar mate, that’s why we recruited him, he just does that time after time, head over the footy,” said Owens.

“He just makes the game look easy the little fella.”

Tigers skipper Bryce Retzlaff tried hard all day, continually endeavouring to lift his side and ended the game with three goals.

Palm Beach Currumbin weren’t the only ones to enjoy a successful grand final day with the Morningside Panthers winning in both the colts and reserves; results that bode well for the future of the Brisbane based club.

Keidean Coleman won the best on ground medal for his performance in the colts, the Lions Academy product racking up the footy at half back and showing his class and composure in the 18.10.118 to 4.8.32 win.

In the reserves, Billy Lambert was judged best afield, after a strong game in the centre where he was creative by hand and won plenty of the footy. Morningside won the contest against Wilston Grange, 12.17.89 to 4.3.27.