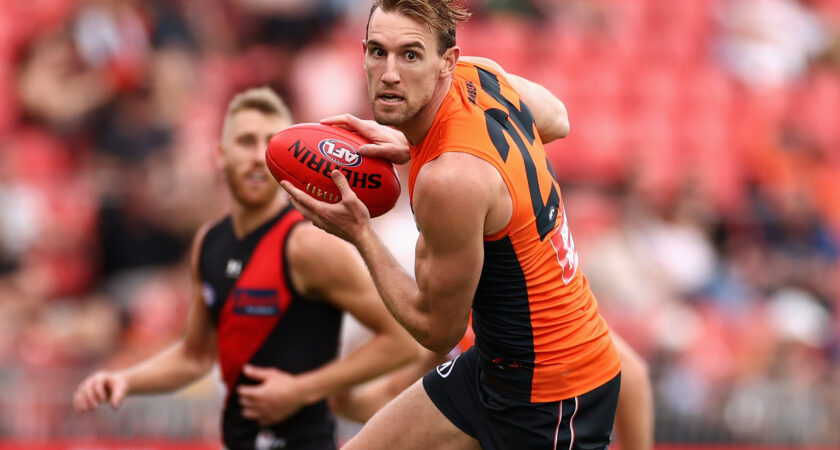 Lachy Keeffe walked off Giants Stadium in Sydney on Saturday afternoon pretty content with his football lot after the GWS Giants had posted a heart-stopping two-point win over Essendon. And rightly so.

Having signed a contract extension only last week that will see him at the club until at least the end of 2022, the 31-year-old Queenslander had played a key defensive role as the rejuvenated Giants squared the 2021 win/loss account at 4-4 after a poor 0-3 start.

He’d played 21 games in a row – easily the longest streak of consecutive games of his 79-game career – and moreover had become an automatic selection for coach Leon Cameron highly regarded as a senior figure at the League’s youngest club.

But in the following 24 hours things went horribly wrong. Sent for scans by the Giants medical staff on Sunday Keeffe was shocked and devastated to learn that he had torn the anterior cruciate ligament in his right knee. It was season over.

The injury had happened 80 seconds from the final siren. Playing on the Bombers’ Cale Hooker, Keeffe had made a critical spoil in a marking contest on the lead 80 seconds from full-time before teammate Jacob Hopper kicked what turned out to be the clincher.

Hooker, coming off five goals against Carlton in Round 7, had averaged 11 possessions and three goals a game through the first seven rounds and was the third-highest goal-kicker in the competition.

Keeffe had kept him to seven possessions and one goal, continuing an excellent start to a season in which he had assumed the mantle of the Giants’ No.1 defender.

One of the great football stories and one of the League’s genuinely nice guys, Keeffe explained he had not thought anything of his knee as he exchanged the customary post-game handshakes before the normal post-game recovery

In a brutal reminder of how quickly things can change, within 24 hours Keeffe learned that instead of preparing for a Saturday night Round 9 clash with premiers Richmond at Marvel Stadium he will head to Melbourne for surgery on Thursday.

It will be the second knee reconstruction of his career – he blew out the same knee after playing the first nine games of 2012.

Ahead of his surgery Keeffe will stay in Melbourne tonight (Wednesday) with fellow Queenslander, long-time close friend and ex-Collingwood teammate Josh Thomas.

It is an ironic reunion. The pair had shared adjoining lockers at Collingwood, with Keeffe in #23 and Thomas in #24, and then served a two-year ban together after testing positive to a banned substance.

While Thomas has powered on to still be playing regularly with the Pies at 29, it has been to Keeffe’s enormous credit that, after being delisted by Collingwood at the end of 2017, he has made the most of a second chance at the Giants after being signed as a delisted free agent.

With suddenly more time on his hands that he would have expected, Keeffe can now reflect on an extraordinary football journey that began in the most unlikely of circumstances just before Christmas in 2007 – three and a half years before his official AFL debut in July 2011.

The son of a Gympie newsagent, Keeffe left home and moved to Brisbane to finish his schooling as a boarder at Marist College Ashgrove, a traditional rugby stronghold.

it was there that the then 204cm stripling, who had played soccer from the age of six, had his first taste of not rugby but Australian football via the AFL Queensland rookie search program.

It was his lack of any sort of football history, together with his excellent athletic potential, that caught the eye of Collingwood recruiting chief Derek Hine via a little-known AFL rule as an unregistered player.

After word of Collingwood’s interest leaked out he rejected a subsequent offer from the Brisbane Lions and headed south, spending his first 12 months learning the game with a Collingwood development squad and playing with Old Trinity in the Victorian Amateurs.

He played four VFL matches late in the 2008 season and after two full VFL seasons in 2009-10 as a Collingwood rookie he won promotion to the senior list in 2011 and played in Collingwood’s 2011 NAB Cup pre-season premiership side in March of that year.

Originally recruited as a ruckman, he had developed more into a key defender and was an emergency for the Pies seven times in the first 13 games of  2011 before his debut in Round 16 against North Melbourne in front of a Sunday afternoon crowd of 53,601 at the MCG.

It was a memorable time, too, for his parents Matt and Karen, who were flown to Melbourne for not just the match but the pre-game Chairman’s function hosted by Eddie McGuire.

Keeffe was the second Queensland AFL debutant of the weekend after Rory Thompson got his first taste of League football with the Gold Coast Suns against Sydney at Metricon Stadium the night before.

It was an astonishing year for Queensland football and an astonishing rise for a player who had not taken up football until he was 17. And it was big news in Melbourne at the time, as much out of curiosity as anything else.

“I played in a few Queensland development teams and squads and that kind of stuff,” Keeffe said at the time. “But the bottom line was that blokes my age were starting to get contracts from the AIS or A-League teams, and I wasn’t getting that so I jumped at the idea of becoming a professional sportsman in a different code. It’s the opportunity of a lifetime – it’s not all the time you get a professional team call you and say they have a contract for you.”

Gavin Brown, former Collingwood captain now in charge of development at North Melbourne, spoke glowingly of Keeffe’s VFL debut in August 2008. “He’s come from a long way back. He’s put on a bit of weight now … and he’s played some pretty good games. He’s a smart kid; he’s a very coachable kid and he knows what’s required. You teach him something and he goes out and does it, which is a good sign.”

And in the week of Keeffe’s AFL debut Mick Malthouse, Collingwood coach at the time, said: “In many respects, it’s probably a better story than an Irish story. With the Irishmen, they’ve got the football in their hands. With soccer, unless you’re a goalie, there’s not much chance of having it (the ball) in your hands. It is a remarkable story.”

Keeffe, whose sister Jessy retired last months after four years with the Brisbane Lions AFLW side, will reflect on a career in which he played 40 games with Collingwood from 2001-14, including an elimination final in 2013.

Having not played at all in 2014-15-16 due to his enforced ‘holiday’, he was resigned by Collingwood with Thomas for 2017 only to be released 12 months later without playing again at senior level.

Having now played 39 games for the Giants, he is one of the great survivors. Having been among 132 players who joined the AFL for the first time via the draft class of 2009, he is one of just 28 still playing. And, with Hawthorn’s Luke Breust and GWS’ Matt DeBoer, he is one of just three original rookies.

Keeffe will spend his rehabilitation looking forward to not just bettering his games tally at Collingwood but pushing towards what will be a miraculous 100th game next year.

In other Queensland news from Round 8, Charlie Cameron, another graduate of Marist College Ashgrove, was the star. He was a key three-goal contributor for the Lions in their hard-fought win over Fremantle at the Gabba on Sunday and could easily have finished with six or seven goals, kicking 3-5.

Cameron, who took a career-best 11 marks, shared top billing with Lions teammates Jarryd Lyons and Hugh McCluggage in the AFL Coaches Player of the Year award. Each received eight votes.

The only other Queenslander to figure in the coaches votes was Sydney ruckman Tom Hickey, who continued his stellar season in the Swans narrow loss to unbeaten ladder leaders Melbourne.

Despite being out-pointed in the hit-outs by the Melbourne skipper Max Gawn, Hickey, with 16 possessions (14 contested), four tackles, six clearances, six one-percenters and a goal, was a more influential figure than the game’s No.1 ruckman

In a game in which Melbourne’s Tom McDonald (10) and Clayton Oliver (6) shared the big votes with Sydney’s Callum Mills (7) Hickey was the only other Swans player to poll.

Gawn went voteless after collecting 16 possessions, three tackles, three clearances, six one-percenters and no goals but is still third on the coaches votes leaderboard behind McCluggage, the new leader, and Fremantle’s David Mundy.

Peter Blucher is a Consultant at Vivid Sport.