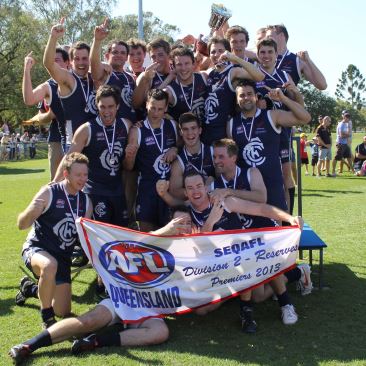 Coorparoo Kings’ Ben Cowan got the farewell most players can only dream of, winning a premiership in his 200th match.

Cowan is only the second player from the Kings to reach the milestone, in what was likely his last game for the club.

Kings president, Sam Haddad, said it was great to see Cowan reach the double ton after being plagued by injury in recent years.

Haddad said Cowan was a great talent and he had caught the eye of some AFL big wigs in his time playing.

“Ben was playing in seniors two years ago and he’s having a cracker of a game, good below his feet and everything,” he said.

“Then some Brisbane lions assistant coaches came down and they’re watching and Alastair Lynch’s brother came up to me and said who’s number 10?  Wow, he can play football.”

Haddad said Cowan wasn’t a ready-made senior footballer but he had certainly earned his stripes over his eight years at the club.

“As a footballer, when he first came to the club, I didn’t think he was going to be a senior player,” he said.

“He definitely turned into one of the better players at our footy club.”

Cowan is a quieter guy, but Haddad said he was a centre point of the club.

“He’s been on the committee, he’s very quiet and keeps to himself but the boys love him.”