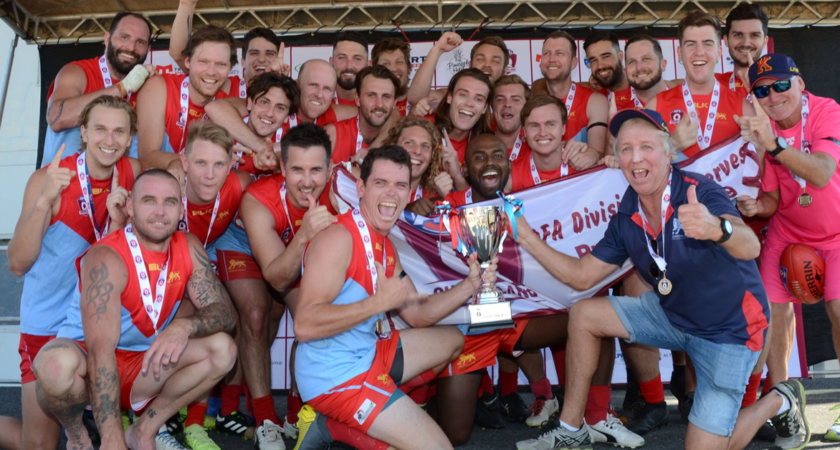 The Kedron Lions rose to the occasion to beat the Wynnum Vikings by 28-points in the QFA Division 3 Reserves Grand Final at Leyson Park on Saturday.

The win places the Lions at the pinnacle of the Division 3 Reserves competition having missed out agonisingly in last year’s decider as they won out against the Vikings, 10.14 (74) to 6.10 (46).

Following their loss of six goals to Redcliffe in last year’s Grand Final, Kedron were looking to set the record straight this year in their road to the premiership.

Heading into the Grand Final, the two teams had an even advantage, both with 15 wins under their belts out of a possible 18 from the normal season.

Although the Lions were the stronger team from the outset and dominated much of the first half.

It was Jarrod MacDonald who booted the first major of the game just after the five-minute mark, beginning their five-goal streak and continuing his great service to his team.

Kedron’s leading goal kicker Justin Smith scored a minute after, followed by goals from Justin Chesson as well as Thomas Allison, rounding out the first term with the Lions sitting a comfortable 37 points above their competition.

The next quarter was much the same, with the Vikings unable to make any significant impact to the scoreboard.

It took until the 13th minute for Kedron’s second most reliable goal scorer Lachlan Hayward to convert two goals for the North Brisbane club.

Then, it was Wynnum’s Ben Johns who troubled the score board attendants after 17 minutes, booting the first major for his side, but his efforts weren’t enough to close the 41-point margin heading into the half time break.

The Vikings seemed to have found some grit following the break because the tables turned, and it was the away team who dominated most of the quarter.

Nathan Killackey booted for his side which opened the flood gates and was followed by three more goals from the Wynnum club, with Liam McPherson, Geoffrey Still and Tyson Lemar converting majors.

It was too little too late though, as the Lions kept adding to the margin closing the stanza 32 points ahead.

The Vikings had one final crack at it as William Robins scored within the first minute of the final quarter, but it was the Lions best Brett Sizer who sealed the deal for the 2019 QFA Division 3 Reserves Grand Final.

Inside the Demons' den: How Surfers Paradise celebrated their Premiership win
Magpies, Gorillas and Hawks to have new coaches