Junior Lions the pride of Highfield 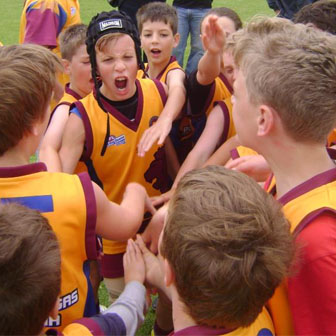 The Highfields Lions have cracked 100 junior players for the first time in their history with 4 new players signing up last weekend.

The Highfields Lions first entered the AFL Darling Downs Juniors competition in 2003 as residents started moving in to the new area 15 minutes North of Toowoomba.  As the population increased, the club initially struggled to gain a foothold in the area with not many more than 50 junior players ever registered in a single year.

Fielding just 36 players in the Under 8, 10 & 12 sides in 2010, the club was looking down the barrel of a questionable existence.  It was then that a plan was set out to make a change and aggressively recruit new players.  This plan included forming a senior team as well as introducing the Under 14 & Under 16 sides.

Fast forward 3 years and the club now fields all 5 junior age groups up to Under 16’s, has grown nearly three-fold and is underpinned by a record 31 Under 8 players running around on a Saturday morning.  The club also fields a senior side to ensure the players have somewhere to progress once they finish their junior careers.

Club President Chris Sheath puts the success down to a simple philosophy of ensuring all players and volunteers enjoy their time at the club and develop passion for the game; although having 4 of his own kids registered also helps.

“Our committee, coaches and parents strive to ensure the players learn and value respect, discipline and commitment; all traits that bode well not only on the footy field but in the player’s lives as well” explained Sheath.

The club is not resting on its laurels however, with the club working hard to ensure it runs smoothly into the future and develops a model of best practise.

“Through our participation in the Clubs Alive Program we are ensuring sustained improvement of the club which hopefully generates further success both on and off the field.  Our members deserve nothing less” said Sheath.

Highfields are not the only club to see big increases in 2013 with the AFL Darling Downs Juniors breaking 750 registered juniors for the first time in its history.  The Toowoomba East Stingers have increased by over 50% and the University Cougars have again broken into triple figures for registered junior numbers.