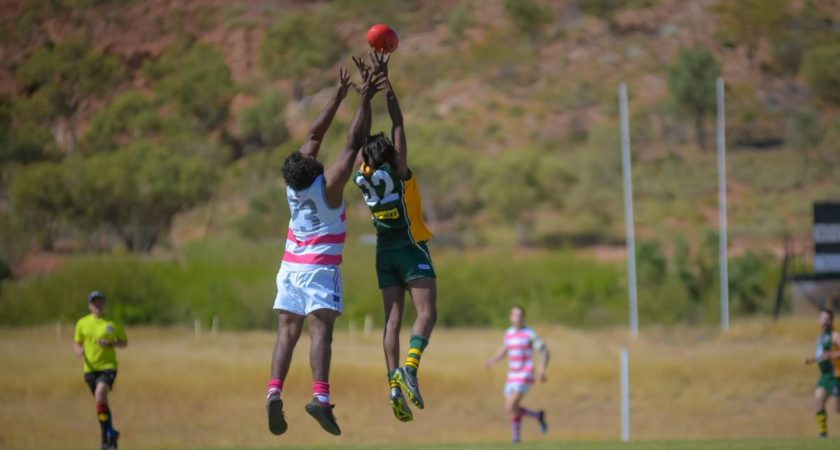 JUNIOR AFL in Mount Isa just got serious, with games kicking off on Friday at Legend Oval.

The season has been running for several weeks, so far focusing on basic skills and introducing new comers to the game.

Mount Isa Junior AFL president Andrew Hurst said the code was thriving on the back of Brisbane Lions’ star Simon Black’s visit to the Isa earlier this year.

“He (Black) had a big influence on numbers,” he said. “Everyone has been talking about the Lions, it’s really been tremendous for us.

“This year there has been more numbers at the start of the year than ever before.”

Hurst predicts numbers to rise a further 10 per cent in the coming weeks, as the AFLQ sanctioned, modified game hits full throttle.

“Each field is split into thirds, much similar to netball, and players cannot go outside their designated third.

“Instead of quarters of halves, the game itself is also played in thirds, meaning each player gets the chance to play as a forward, a centre and a back.”

“We’re really happy AB has come back on board with us,” Hurst said.

“AB was here last year so he knew what to expect coming back this year and its really helped, he has been able to hit the ground running compared to someone new who would take time to learn the role.

“AB is great with the kids, for someone so young, her certainly has a way of communicating effectively with them on their level.”

The Victoria Point Sharks are giving back this Christmas

By Ant Wingard It is the season for giving and Victoria Point JAFC have embodied just that as the club are set to once again help those in the community this... [more]