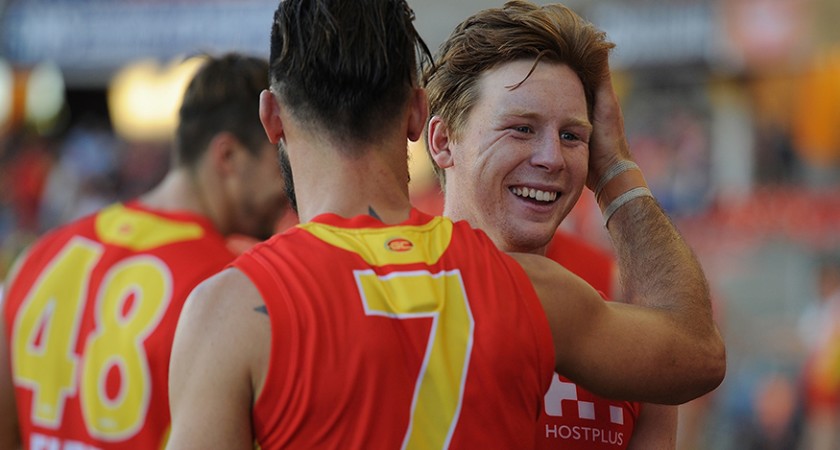 The Gold Coast Suns investment in the club’s talent academy has paid off again, with Jesse Joyce signing a contract extension.

The home grown product was a surprise packet for Rodney Eade in 2016, missing just one game since making his AFL debut in the side’s round 11 clash against the Sydney Swans at Metricon Stadium.

The defender impressed in his maiden season, displaying composure and decision-making beyond his years.

It’s another strong step forward for the Gold Coast Suns Talent Academy, with Joyce becoming the second player to graduate through the elite junior program and onto the primary list, joining former Sun Andrew Boston in doing so.

For Joyce, who was selected as a rookie last year, the chance to continue his AFL dream in his own back yard is a privilege he does not take for granted.

“I’m incredibly grateful that not only do I get the opportunity to play AFL football at the highest level, (but) I also get to do so in the region I fell in love with the game,” Joyce said.

“The club has been a tremendous support for me and my family, and make every effort to ensure all players that walk through the door feels a sense of belonging to this football club.

“Having developed through the club’s Academy program, I have seen the game continue to grow at a massive rate, and I am passionate about playing a key role in AFL football’s continued growth in Queensland.

“As a playing group, we are all committed to building a winning culture aimed at delivering sustained success to the Gold Coast.”

“We are thrilled to be a vehicle for Queensland talent as they pursue a career in the AFL,” Clayton said.

“To be able to secure elite Queensland talent forms a key component of our list management strategy, and Jesse has shown all the makings of a long-term player for our football club.

“We are delighted with his progress and look forward to his continued development and improvement.”