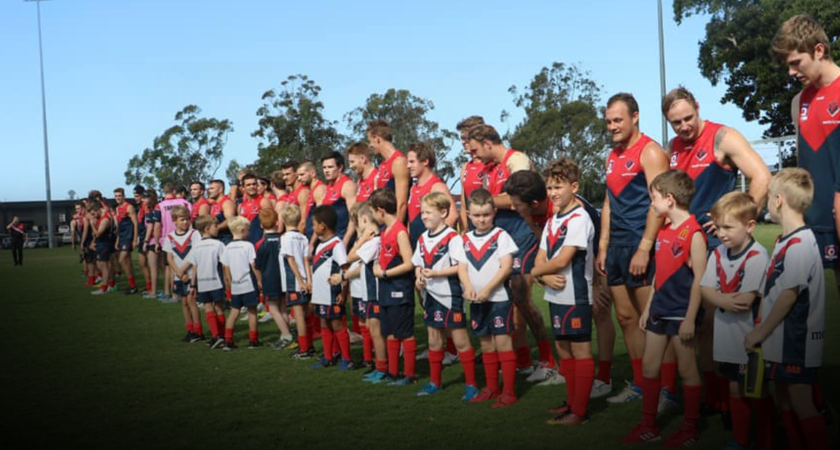 For all intents and purposes youngster Sam Hilton-Joyce arrived early at Subaru Oval on Sunday to prepare for a colts game with the Surfers Sharks against Broadbeach.

Six hours later he made it on to the field, but as a seniors debut-maker for Surfers Paradise in the big Gold Coast derby.

And what a first seniors game it was for the 16-year-old.

Hilton-Joyce kicked five impressive goals as the Demons downed their cross-city rivals by 12.4 (76) to 9.5 (59) to remain only one of two teams unbeaten in the QAFL seniors this year – premiers Palm Beach Currumbin are the other side without loss.

It was a good game, highlighted by some crunching tackling, some sweet ball movement back and forth, plenty of errors from the Cats and, of course, young Hilton-Joyce.

The slightly-built teen, who could easily ride the topweight in the first race at the Gold Coast next weekend was, said coach Brad Moore, the difference between the sides.

A Southport junior product who is now part of the colts merger between Southport and Surfers to become the Surfers Sharks, Hilton-Joyce came into the Demons side as a replacement for triple best and fairest Cassidy Haberfield.

Haberfield had a muay thai bout on Saturday night – which he won – but he told Moore he didn’t feel right and didn’t want to let the team down.

That decision was made early Sunday morning and, after much discussion on possible options, the Demons came up with young Hilton-Joyce.

“We tossed and turned with a few alternatives but Sam’s been training with us a lot,” said Moore.

“He played pre-season games and had been thereabouts, so we thought why not?  He was probably the difference in the end.

“He grabbed his chance and he grabbed it by the scruff of the neck and made it his own.”

Moore said later that everyone knows the Demons can win pretty, like they did against Labrador the previous round.

But this time, when the Cats came at them late in the third term, it was time to roll up the sleeves and ditch pretty play for, well, ugly play.

“I thought we were doing really well, especially going in at half-time, but we lost a couple of players and started playing into their hands a bit and I think they made us play the way we don’t want to play,” said Moore.

“In the end we had to dig deep and, yeah, play ugly.

Southport-listed Haydn Kiel was excellent for the Dees, as were Brody Haberfield (again), Paddy Rankin on a wing, and defenders Trent Goldfinch and Sam Jewell.

And of course, young Hilton-Joyce was the best of them all as he soaked up some unnecessary roughing-up tactics from much larger rivals.

Broadbeach were their own worst enemies according to disappointed coach Beau Zorko after the ball went to the Surfers attacking end on the back of quite a few Cats errors.

“They thrived off our mistakes, I think it is the best way to put it,” he said.

“Our skill execution was poor and we played into their hands a fair bit – I thought we played a bit dumb today.”

Redland-listed Seb Rogers was good on a half-back flank for the Cats, forward Jackson Fisher kicked 3.1 and provided a good option up front, Joel Newman went in hard for the ball at contests and veteran ex-Collingwood big man Jason Cloke showed glimpses of what he can be capable of.

While the Demons take on Palm Beach in one Coast derby next weekend, the Cats are off to take on Labrador in a second all-Coast affair.

Palm Beach Currumbin recorded an equal record high win against Morningside on Saturday in a sobering result for the Panthers to ponder over on their trip back to Brisbane.

PBC’s 14.13 (97) to 3.6 (24) victory at Salk Oval also sounded an ominous warning to rivals hoping to deny the southern Gold Coast club a hat-trick of premierships.

As beaten coach Clint Watts said, Palm Beach Currumbin are ‘a good team’, perhaps stating what everybody in the QAFL already knows.

The final 73-point margin was the same as when PBC beat Morningside in Round 12 of the 2016 season, also at Salk Oval.

Pre-match talk centred on a number of changes forced on the Lions in their back six as a possible weakness. Wrong!

No Jackson Emblem, no Adam McKenzie, no Josh Lys meant fresh faces in the defensive formation.

But the Lions never missed a beat and restricted the misfiring Panthers to just three goals, two of them coming late in the last quarter.

Tom Frazer came in, former skipper Angus Munro was a standout back in first grade and first-gamers Jack Marino and Jordan Gribble had coach Jess Sinclair all smiles afterwards.

“The blokes who are going to be available again are no certainties to get back in, it’s a good position for us to be in,” said Sinclair.

As good as the PBC back liners were, Morningside were absolutely lacklustre inside the 50-megtre arc. They simply had nothing that troubled the rampant Lions, who were also ahead in contested possessions.

“I was pleased with the way we hit the contests all day,” he said.

“Our midfielders won the ball at the coalface and our pressure in and around the footy was probably the reason why we won by that margin.”

The post-match look on the face of Clint Watts said it all. He looked completely shattered and had perhaps only one positive to come from the lesson.

At three-quarter time Watts challenged his players to at least win the final term. They did that, by 2.1 to 2.4.

Watts was asked if the 21-day break between games for Morningside came back to hurt his players. It did, to a degree, he said.

“It is good to be playing footy now,” Watts quipped. “But I did think it hurt us.”
The clash was highlighted by two pieces of individual brilliance.

The first came through a freakish soccer-like goal from Jesse Derrick in the 17th minute of the second quarter. It is worth catching up on match vision.

The second was a goal from aptly named Rayne Harris, who marked and kicked a screamer in the third term in the middle of a torrential downpour.

Understandably PBC had winners all; over the field, none better than Munro, Tom Thynne, Jason Burge and Zac Harrison.

Labrador turned on what skipper Bryce Retzlaff thought was some of their best football of the QAFL season to date when they downed Mt Gravatt by 57 points at Cooke-Murphy Oval on Saturday.

The Tigers won by 13.13 (91) to 4.10 (34) for their first win of the new season under coach Liam Burke and surprisingly produced some quality football when the heavens opened up in the second quarter.

“I reckon that was the best we have played this year even though it was raining,” said Retzlaff.

It has taken the Tigers until now to start finding their feet after a number of players were forced into limited pre-season preparations and after an influx of new players to the club.

A reaction was expected after the Tigers copped a 95-point belting from Surfers Paradise the previous weekend and the home side certainly did that.

After an even first quarter the Tigers put on a run of three unanswered goals in the second for a 23-point half-time lead.

Then it bucketed down, but the Tigers lifted a notch and the Vultures could not respond.

“I always had a feeling it was going to take some time with a lot of guys coming off limited pre-seasons – and we’re still missing about six premiership players,” said Retzlaff.

“But all this was was one win and obviously we have another big one next weekend with Broadbeach.”

Retzlaff admitted it was a huge relief to bounce back from the Surfers thumping which embarrassed the club.
“We had a big night on Tuesday after that one,” he said. “It was an open and honest discussion and to get a response was really pleasing and it showed character among the group.”

The appearance of Ben Fagan for his debut game and the inclusion of Southport NEAFL pair Emmanuel Baru and Rob Clements served as major bonuses for the Tigers.

Baru, who played with Labrador before switching to Southport, was brilliant with five goals and Clements kicked one.

With Alex McKay and Atom Davidson on fire in the middle the Tigers outscored Mt Gravatt by 7.7 to 2.3 in the post half-time rain.

The loss has put some pressure on Mt Gravatt’s first-year coach Adam Boon because the Vultures are currently sitting eighth of nine teams after one win and three losses and with a frail percentage of 68.77.

They are in some sort of a slump but all is not lost quite yet.

Boon conceded his players were not able to match it with the tigers in the rain.

“They adjusted to it much better than we did,” said Boon.

Best for the Vultures were NEAFL-listed pair Jonah Licht (Redland) and Jack Coghlan (Aspley), along with Chris Murphy.

Hawks flounder in the wet as Magpies swoop

Sandgate coach Jarad Marsh was left cursing the weather gods after the Hawks bowed to superior physicality in a sodden Brisbane derby against the Western Magpies on Saturday.

In a strange game statistically the Hawks kicked first four goals of the match, the Magpies three of four goals in the second quarter, all three goals in the third before the sides went major for major in the final stanza.

Magpies coach Brydan Morgan thought his side could have won by more. They had double the forward 50 entries and double the number of scoring shots, he said.

Yet his rival Marsh was of the view the young Hawks had control of the game until the rain pelted down.

“In the dry we were up and about,” said Marsh after the Hawks led by 24 points to nothing at quarter-time.

The Hawks were ahead by just the one point after the Magpies’ four second-term goals but they allowed the visitors to kick the only three majors of the third quarter.

“We were up by four goals to nothing and they couldn’t get their hands on the footy – until it rained.

“In the rain their bigger and more mature bodies came right into it.”

Morgan was happy with the Magpies in what he described as an ugly contest.
“I feel we didn’t play great football yet I thought we could have won by a lot more,” he said.

“Still, a win is the pleasing thing before a bye.”

Morgan had underrated midfielder Gareth Crawford as best-on-ground for a second successive and was also more than happy with wingman Daniel Edwards.

“He would have had 40 possessions,” said Morgan of Edwards.

Another grand performer for the black and whites was Will Fletcher.

A highlight for Sandgate, and no doubt one that will be resurrected time and again, was the impact of ex-Aspley junior Ky McKenzie in his seniors debut.

McKenzie was in as a replacement for Brisbane Lions U16 member Lochlan Harrop and instantly made an impression when he kicked the first goal of the game with his first touch in QAFL seniors.

Round 4 Bond University QAFLW Preview
Not Now, Not Ever - AFL Queensland says no to domestic and family violence