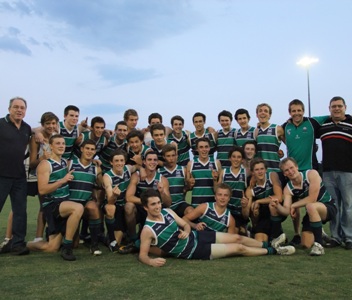 Playing in the best Open-standard school boys’ competition on the coast, Matthew Flinders came up against an equally dominant team in the boys from Mountain Creek State High School in the grand final at Fisherman’s Road.

With both teams going into the grand final undefeated, it shaped as an exciting match and didn’t disappoint from the first bounce.

Both sides played extremely hard at the football and went goal for goal in the first three quarters, with neither side able to pull away from the other.

The first quarter was played at a furious pace and at quarter time Matthew Flinders held a one point lead.

The boys did a fantastic job to match the intensity of the first quarter again in the second quarter with pressure applied by both sides limiting scoring opportunities. Both sides again only kicked one goal each in the second quarter, and at the main break scores were level at 2.2.14 a-piece.

In the third quarter, both sides had opportunities for goals and let them slip, with both teams kicking three behinds in the quarter. Mountain Creek finally put one through the middle to get a goal up with seven minutes to go.  But right on the three quarter time siren, Gabe Bell kicked a goal for Matthew Flinders to again level the scores at the final break.

This proved the momentum changer that Flinders needed for the final quarter.

Matthew Flinders came out and booted the first goal of the quarter and got out to a six point lead, down the other end Mountain Creek hit the post twice in what proved to be costly misses.

Flinders then went on to put through another two goals for the quarter and to take out the 2011 Josh Drummond Cup 6.6.42 to Mountain Creek 3.8.26.

For Mountain Creek it was their second Grand Final loss in as many years and coach, Justin Pritchett was disappointed. He acknowledged the Matthew Flinders side for their endless running and pressure on the ball.

Matthew Flinders coach, Ben Stanley praised his players for the endeavor and hard work they put in over the Josh Drummond Cup.

Tom McKee was awarded best on ground and won the Ian Nankervis Medal and was closely followed by Soul Cormick who put in an excellent display of skill and hard work.

Harris Thompson and Michael Uni racked up some solid possessions with the two captains, Zac Southern and Kyle Palmer both contributing solidly to the win. Two goals from Gabe Bell also earned him one of the best on ground recognitions.