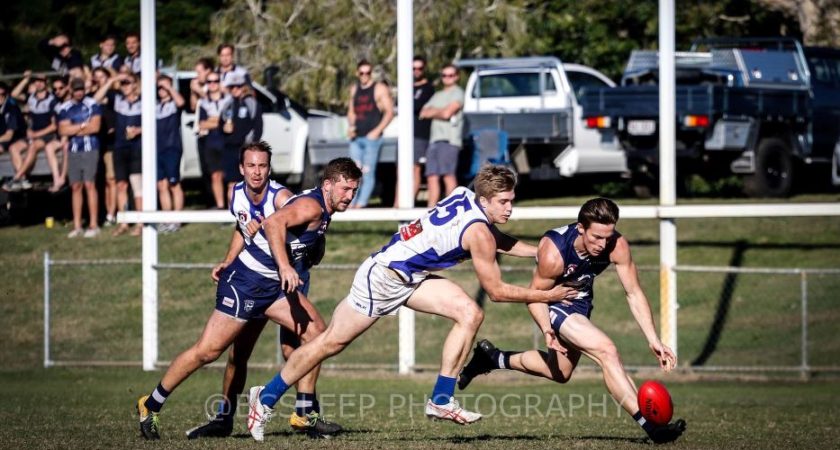 The 2018 Syd Guildford Trophy remains without any clear winner as voting now becomes withheld for the final 5 rounds.

With 14 rounds of the QAFL season in the books, vote announcements will cease until the overall winner is announced at the Grogan Medal on September 16.

Morningside’s Campbell Wearne remains atop the leaderboard however a broken collarbone suffered in Round 13 has placed an injury cloud over his playing status for the remainder of the home and away season.

Surfers Paradise midfielder, Cassidy Haberfield, remains in second place, with just five votes separating first and second in the count although he failed to poll any votes in the Demons’ narrow Round 14 loss to Broadbeach.

Broadbeach’s Blake Erickson remains in third place on 43-votes, but the big-bodied midfielder has polled just once in his past four games.

Panthers’ ruckman Peter Mollison is the big mover inside the top ten having polled 21 of his 37 votes in the past four games.

In Round 14, Mt Gravatt rebounding defender, Jayden Crawley polled seven votes in the Vultures’ win over Labrador and has moved back inside the top ten as a result.

The coaches were split in the Lions’ slim victory over the Western Magpies on the weekend with nine individual players earning votes in the game.

Ryan Harwood (six) earned the top-votes in the contest and was accompanied by Lion pair Nicholas Crawley and Zac Harrison (both five) in the count.

Fletcher McIvor (two) was the lone Wilston Grange player to earn votes in the Gorillas’ loss to Morningside.

Sam Godfrey (seven), Ashley Evans, Peter Mollison (both six) and Darcy Cameron-Reeves (five) all earned the praise of both coaches in the voting.

See the full Round 14 votes below: