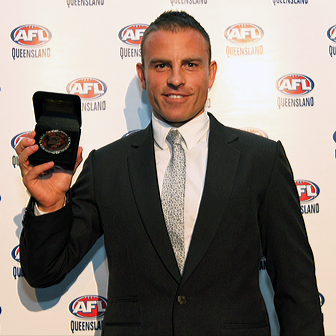 Surfers Paradise Demon’s midfielder Jake Ryan has been awarded the Duncanson-Todd Medal for best and fairest player in the Pineapple Hotel sponsored SEQAFL Division 1 Competition at a gala dinner at Brisbane’s Mercure hotel on Monday night.

Halfway through the count it looked to be a tight race with Ryan, Wilston Grange’s Lee Smith and Western Magpie Anthony Corrie tied with eight votes apiece and no more than two votes separating the top ten contenders.

A superb last-half to the season saw Ryan sprint away from the field, winning the count with a total of six three-votes, one two-votes and one one-vote.

Ryan kicked off his AFL career as a Surfers Paradise junior before starting senior football with the Southport Sharks in the early 2000’s.

A move to Victoria saw the classy centreman claim the Morris Medal for the Oven’s and Murray league’s best and fairest in 2008 while playing with Corowa-Rutherglen.

Ryan returned to Queensland to play with Surfers Paradise in 2011.