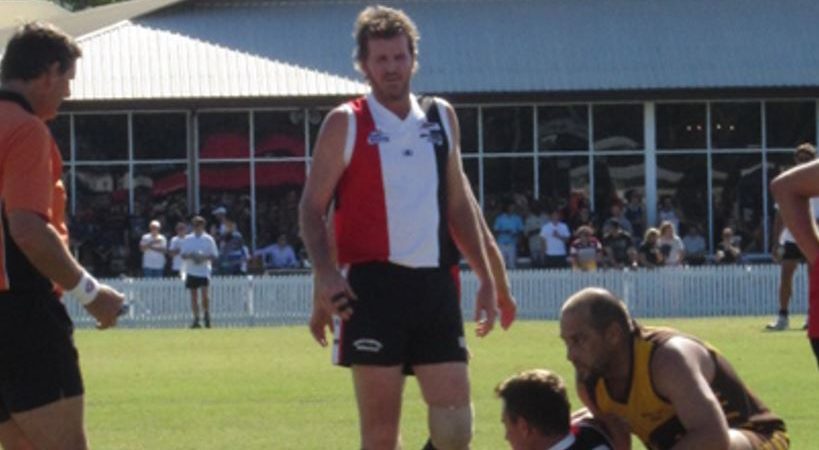 That’s if he hadn’t done so already.

Dunbar has already experienced a lot throughout his career, played entirely with his hometown Saints. This weekend his legendary status will reach a crescendo as the 46-year-old runs out for his 500th game with the club.

The milestone is an unprecedented achievement for one of the state’s longest serving footballers and given the enormity of the accolade, it’s hard to find a worthy comparison too.

There’s no real way of knowing just where Dunbar’s feat sits among AFL Mackay history, especially given that accessible records weren’t prevalent when he made his Saints debut back in 1989.

Regardless, the accolade is monumental and something Dunbar has been striving to for a number of seasons.

“My goal was to get to my 500th because I knew I was getting close,” Dunbar told aflq.com.au.

Dunbar was just 19 when his first flirtation with the sport occurred; something he admits was a bold move given he knew nothing about football.

“I never played football in my life, but I moved to the town for work and my mate was playing so I came down to see what it was like,”

“I didn’t know much about the game at all. The first time I rocked up to play, the coach said, ‘you can go in the ruck,” so I said ‘okay, what do you want me to do.’”

“I had no idea what I was doing. That was my earliest experience with the sport.”

Despite a blind inception to the sport, Dunbar loved his experience right away and has since spent the past 29 seasons playing with the Saints.

And yet still today, nearly three decades after his debut, that passion is the thing that keeps Dunbar going.

“I just enjoy the mateship really,” he said.

“I’ve played with blokes who are now playing with their sons so that side of things is just really nice.”

Most of his Saints career was played in the senior men’s side where he featured 342 times for the team.

But as the years progressed and Dunbar grew older, the decision was made to drop down to the reserve grade side – in hindsight, a masterstroke to ensure his playing career would be maximised.

“It was mainly because I was getting a bit older and there were a few younger boys coming through.”

“I did enjoy my senior footy.”

At the turn of the millennium, North Mackay won premierships consecutively in 2001-2003 and another in 2008; all of which have now become cherished memories for him.

“There was a massive buzz around the club. It was unbelievable.”

“I’ve been very lucky over my time.”

Dunbar has played a game in each of the past four decades and despite his 47th birthday looming close at season’s end, he insists his body is still capable of playing and failed to rule out a 30th season in 2019.

There are no secrets to his longevity in the sport either – only the comradery with his teammates and love for his North Mackay Saints that keeps the fire burning.

“The club means the world for me. It’s been a great club to be a part of.”

“In my bar downstairs, I’ve got all of my guernseys and Saints stuff. I love the club through and through.”

On behalf of all of us at AFL Queensland, congratulations Chris on a wonderful achievement!

Triple century up for Morningside champion
Round 15 Bond University QWAFL