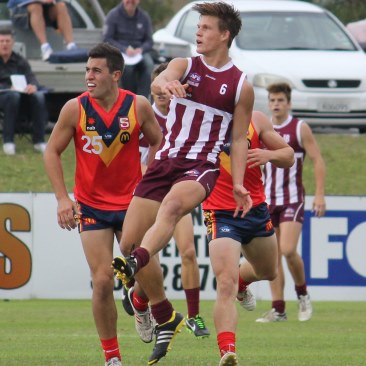 This week is a really big week for us, travelling down to Tassie for our third nationals match.

I really enjoy travelling and I’ve been counting down the days until this trip and our week in Melbourne for nationals.

It’s really good to be away from home, and be in a different environment with all the boys, and it’s something we haven’t done too much this year.

On the flip side, though, it’s a huge week for us in terms of our nationals campaign, playing a Div two side for the first time.

Against SA and Vic Metro we really had nothing to lose, but now everyone will be expecting a lot more out of us.

There’s no more room for excuses and it’s now about performing as a team so we can give ourselves the best chance of getting noticed by recruiters.

I’m feeling relatively confident about the game, and winning would really set the tone for the championships.

The travel will be a major test, just making sure that everyone prepares the same way as they would at home.

On a personal level, I am starting to think more about draft day – I mean being drafted would change your life; it’s hard not to think about it.

This year the pressure is a lot more intense compared to last year, because I knew I wasn’t going to be drafted, so I was able to just focus on improving gand making a bit of a name for myself.

It worked in my favour a bit and I ended up having my best year of footy.

Now, a few people will probably know who I am going into this carnival and the next few games will play a huge part in my chances of being drafted.

The stakes are definitely higher now, but I don’t want to be distracted by what recruiters are thinking, because it’s more likely to stuff you up.

If you make a mistake,  you’re thinking “the recruiters won’t like that” and it stops you playing as well as you can.

Going into the Vic Metro game earlier this year, I let the nerves and the external thoughts get to me too much and I didn’t play my best footy.

One of the hardest thing, is trying to block out the more negative side of things externally, whether it be through articles or word of mouth.

Having played as a bottom-ager last year and in the 16s in 2011, it’s definitely getting easier to deal with hearing things about myself.

As a 16 year-old, I was still maturing and learning the ropes, but now I know a lot more about footy and I deal with it a lot better.

It’s hard to avoid hearing those negative things about you, and I’ve heard them now and then, but I try to draw on those in games to improve those areas, rather than let it get to me.

Sometimes those negative thoughts can creep in, though, particularly when I think about all the people who have helped me reach this point.

There are plenty of people who have gone out of their way to help me in footy, and in the back of my mind, I think being drafted would help repay a lot of the faith they’ve shown in me.

Deep down it would be upsetting if I were to miss out, and I think I’d feel like I’d let some of those people down, but I don’t let those thoughts overtake me.

The next three games are probably the most important of the year, and each week that brings me closer to draft day, I get a bit more excited about what could happen.

But nationals are just one part of the process of being drafted.

Every week I am playing to get noticed in club footy, and prove that I can play against senior guys, not just 18 year-olds.

And the Dayne Zorkos and Sam Dwyers of the world have shown me that this year isn’t the be all and end all in terms of making the AFL.

I can’t wait to get out there on Saturday and just play as well as I can.