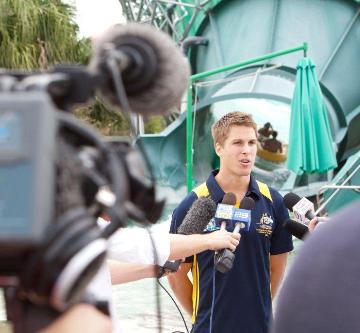 The Australian team takes on the Irish in the International Rules Series decider this Friday night, November 4, at Metricon Stadium-Gold Coast.

The first match in the two-game International Rules Series resulted in Australia being overpowered by Ireland by 44-points at Etihad Stadium, Melbourne Friday night.

The series moves to Metricon Stadium on the Gold Coast this Friday, November 4, for the deciding match to see who takes home the Cormac McAnnallen Cup.

Experienced Australian coach, Rodney Eade has said he feels confident the Australia team will bounce back in game two and are still in high spirits about retaining the McAnnallen Cup.

“But we need to be a lot better than we were last Friday night, there’s no doubt about that.

“I can certainly promise the supporters and the people going to the game that it will be a lot more competitive game.”

Both the Irish and Australian teams arrived on the Gold Coast on Sunday to commence pre-match training in the sunshine state.

Among the pre-match activities planned for the Australian team are days at White Water World and track laps at the V8 Supercar school to boost team morale.

Locals on the Gold Coast will have plenty to cheer about when Gold Coast SUNS ruckman Zac Smith lines up against the strong Irish side on Friday.

With injured Jake King out of the Australian side, Brisbane Lion Joel Patfull will be his replacement ensuring more local support.

“We’ve got Joel Patfull from the Brisbane Lions coming into the squad, so we’re certainly looking forward to this contribution,” coach Eade said.

Queenslanders can support the Australian team at Metricon Stadium, Friday night, with tickets available through Ticketmaster for $25 unreserved seating.

Gates for the match will open at 6pm with live music and entertainment before the game for Australian and Irish fans.

Corporate packages are also still available with The Deck, The Lounge and The Coaches Field Club – prices starting from $130 per person offering premium seating, pre-match events and car parking.

For information about tickets call Ticketmaster on 1300 136 122 or visit www.ticketmaster.com.au  and for further information regarding corporate hospitality packages visit The Gold Coast SUNS website www.goldcoastfc.com.au