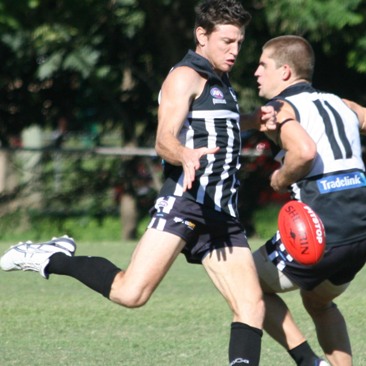 By Terry Wilson
QUALIFYING final rivals Western Magpies and Palm Beach-Currumbin have significant injury concerns heading into their big clash at Chelmer Oval on Sunday.
The Magpies have up to five players under injury clouds and the situation is much the same down on the Gold Coast at Palm Beach.
It seems likely that neither club will be able to finalise their final 22 selections until late Saturday afternoon, pending fitness tests.
And there are some big names among the walking wounded.
In the Magpie camp, forward Greg Lavery and ruckman Hayden Thick have already been ruled out.
Those in doubt are captain Chris Mihalopoulos, big forward David Hamill (ankle), tall forward Jye Spencer and back-up ruckman Dominic Beer.
Hamill is a major concern, having spent Thursday night in hospital undergoing blood tests.
The only certain selections as replacements this weekend, said coach Peter McClennan, are  classy forward/midfielder Val Pope and ruckman Scott Clarke.
Pope is having his first hit-out for a month, so could be a touch underdone.
“We’re giving them all until early Saturday afternoon, then we’ll make judgement,” said McClennan.
PBC also have some tall poppies awaiting tests.
Heading the list is class veteran James Drake (sore back) and he is joined by Simeon Blowes (foot) and Brendan Rhodes (elbow).
“We’ll finalise our side after they have fitness tests but at this stage the only definite outs are Blake Schneider and Jack Munro,” said coach Craig O’Brien.
The Lions will regain defender Damian Lyon, forward lee Clark and co-captain Matt Carroll, who kicked five goals in the only match between the sides back in round two.
It was that result, when the Magpies kicked 22.8 to 17.11, including six goals to two in the final quarter, that has convinced the Lions they can down their rivals on Sunday.
The Lions firmly believe they lost that match rather than the Magpies won it.
“They had the full deck out there and were pretty fit,” said O’Brien of round two.
“We were in a situation where fitness took over in the end.
“But we’re a completely different side now. We’re harder and a lot fitter and we’ve improved a lot.
“The Magpies are a good running side, but I’ve heard they have lost quite a few good players.”
McClennan responded by saying the Magpies, too, have improved a lot, even if he has not seen the Lions since their early-season fixture.
“We’ve just read reports (about the Lions) and we know they’ve improved. But we’ve improved as well,” he said.
The rival coaches both agreed it is a strange situation their clubs are in.
Win and they travel to Noosa for the second semi-final next weekend. Lose and they earn a home-ground first semi-final.
“But having the double-chance at least gives us the luxury of not taking anhy risks with suspect players,” said O’Brien.