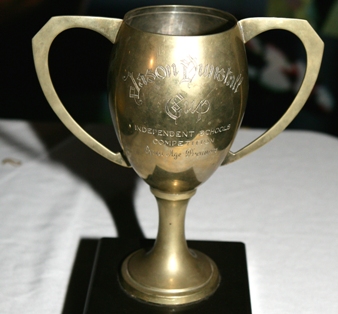 Heading into Semi Final week, we examine who is leading their divisions and what to expect from the QIS Finals.

The Queensland Independent Schools AFL season is about to head into finals time in the coming fortnight. In its twenty-first season, the Brisbane division has almost 60 teams competing across the various secondary age groups with schools from as far north as Caboolture and as far east as Thornlands fielding teams.

There are also divisions currently running on both the Gold and Sunshine Coasts and in the Darling Downs.

There are 5 divisions running in 2011 with some ladders appearing easier to predict finalists than others. In the Open Division One competition, the Jason Dunstall Cup (pictured), it has been a close tussle at the top between Nudgee College and Brisbane Boys’ College all year, with the two more than likely to meet in the grand final on 14th October. Division Two Michael Voss Trophy will see John Paul College take on last year’s premiers Brisbane State High School, also on 14th October. With both schools having met twice this season, they share a win a piece and both games have been fiercely fought games, so this shapes up for another exciting grand final. The Division Three John Downing Cup has a North and South Competition with Hillbrook Anglican College leading the North division and Faith Lutheran College leading the South division. Finally in the Division Four John Stackpoole Cup, Nudgee and BBC are the tear-away leaders and look to emulate their Division One teams by meeting in the grand final.

The Division One Stephen Lawrence Shield Competition is probably the closest division in the entire competition. All four top teams (Nudgee, Grammar, BBC and Churchie) are separated by 4 points with the final round to come. With points being the major factor determining grand final entry, it will be very important teams gain their bonus points to give them their best opportunity to do so. (Teams can receive one bonus point for supplying goal/boundary umpires, and another point if their AFL uniform is matching). The Division Two competition saw Grace Lutheran College and Mueller College in the North of Brisbane fight out a ‘best-of-three’ series with Grace winning the premiership there. In the South, Sheldon College and John Paul College finished first and second respectively, and if the win their Semi Finals (Sheldon v Brisbane SHS; and JPC v Ormiston) will set up a cracking grand final.

The Clint Bizzell Cup sees Brisbane Grammar sitting undefeated at the top of the table, with BBC, Nudgee and Churchie to fight out who meets them in the grand final (14th October). In Division Two, last year’s Year 8 Premiers Ormiston College have continued their strong run this year and lead the Year 9 competition undefeated. It is likely to be either Mount Maria or BBC who will meet them in the grand final.

The Robin Hull Cup has two divisions running this season, with Brisbane Grammar leading undefeated in Division One. Nudgee and BBC will be the likely contenders to meet Grammar in the final on 14th October. In Division Two, the dominant and undefeated St Lawrence’s College will take on Ormiston College in the first Semi Final, while the evenly-matched Sheldon College and John Paul College will contest the second Semi Final.

With only three teams competing this season, Brisbane Boys’ College will most likely meet Anglican Church Grammar in their grand final, also to be held on 14th October.

Grand Finals for Division One Open, Year 10, Year 9, Year 8, Year 7 and Open Division Two will be contested at the annual QIS Grand Final Night this year to be held at Yeronga AFC, Cansdale St, Yeronga, on Friday 14th October from 4:30pm. It will be a great night of footy – finals times will be as follows: