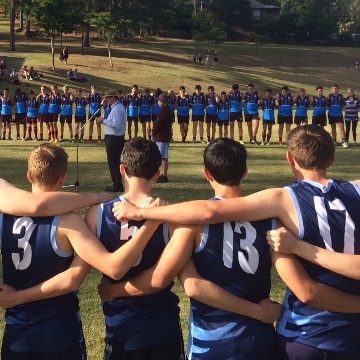 With the Queensland Independent Schools footy season wrapping up this week, here are six things we learnt:

Footy is not just confined to the winter months in Queensland with competitions running from early Term 2 right through to Term 4. The competitions are very much dynamic with new inclusions each year to the various divisions. A new competition for SECA (South East Colleges Association) in Term 4 2015 will see a large number of new students offered the opportunity to participate in a weekly AFL competition. The AIC (Associated Independent Colleges) will abandon their brief four week competition and be invited into the QISAFL running throughout Term 3 and early Term 4, also giving more students an opportunity to play.

There’s no such thing as a favourite

The Bayside’s Carmel College and Sheldon College turned predictions on their heads during the semi-final stage of Brisbane’s Open South division this year. Finishing third and fourth respectively, it seemed an unlikely task to take on ladder leaders Faith Lutheran and John Paul College. Not only did both schools rise to the challenge, but after a particularly slow start to the season Sheldon College stormed home in the grand final against Carmel to retain their premiership in front of a vocal crowd at Alex Hills.

Just like an Easter Monday Geelong v Hawthorn clash, Queensland’s independent schools have forged some great rivalries in their recent footy history that everyone looks forward to during each season. In Brisbane’s Open North division, Caboolture’s St Columban’s College and Enoggera’s Hillbrook Anglican School have met as ladder leaders in the last three grand finals. All three finals have been closely fought with this year’s Everton JAFC final being decided by a kick with a minute left on the clock. Likewise in the Year 10 division, John Paul College and Sheldon College have also met on the last three occasions with thrilling finishes and big supporter crowds. JPC ‘Eagles’ also look forward to the ‘battle of the birds’ each year against Faith Lutheran Falcons.

Hosting a grand final is more than a game

Earning a home grand final is a huge advantage, come the big day. Entire school communities come down to their oval to support and cheer for their team, and John Paul College took professionalism to a whole new level this year. The ground was meticulously marked and prepared. A small stage, complete with lecturn, booming PA system and microphone. Perfectly arranged seats for officials and VIPs along the boundary. Students on hand to ‘dj’ before, during and after the game. An official welcome from the school, acknowledging the traditional owners of the land. And a good old fashioned sausage sizzle to keep the large crowd fed while they watched a most entertaining and nail-biting final.

Without a doubt school sport in general would not be possible without the countless hours teachers put in to ensure their students get a chance to participate in AFL. One of the outstanding examples comes from St Joseph’s Nudgee College, where Queensland Team of the Century player John Stackpoole teaches. Since the inception of the QISAFL competition in 1991, John has lead the Nudgee boys through their paces each season with the school winning this year’s First XVIII, Second XVIII and Year 9 GPS Division premierships. John is just one example of the numerous hard working teachers who support AFL in the independent school system, and without his work, his school would not be as successful at AFL.

Winning a premiership for your school not only brings success to the school, but shows the next generation what is possible with hard work and spirit. The Southport School is going for their fourth consecutive senior Clark Keating Cup premiership this week, an amazing feat for the Gold Coast competition. Likewise in the Darling Downs’ Independent Cup, Toowoomba Grammar has won consecutive premierships over the last few years; with their junior teams now further engaging in Brisbane Lions Cup competition.