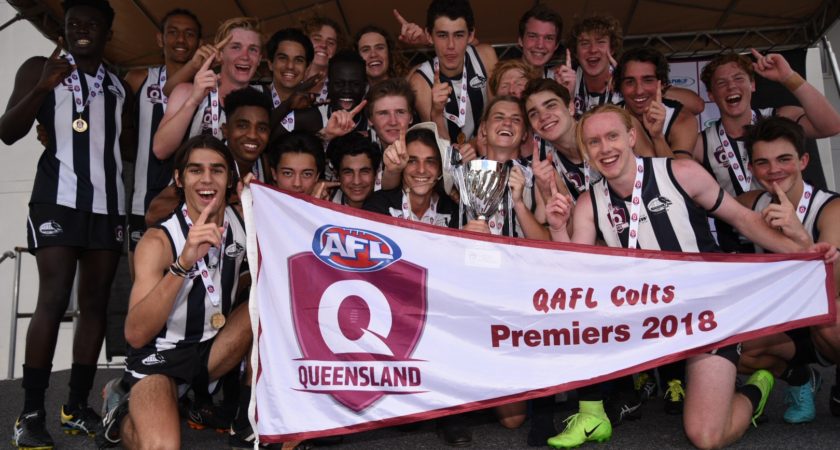 A six goal stretch in through the middle stages of the game laid the foundations for the Western Magpies to clinch the 2018 QAFL premiership by 23-points at Leyshon Park.

The Magpies booted an unanswered six majors between the eighth minute of the second term and the tenth minute of the third term to hold off a gallant Palm Beach Currumbin 12.19 (91) to 9.15 (69) in the QAFL Colts Grand Final.

The win caps off a remarkable season for the black and white after the side willed their way to the minor premiership.

“To be honest, I’m completely ecstatic right now. There’s a lot of elation going through the veins but there’s a little bit of relief as well,” Western Magpies coach Jake Feuntes told westernmagpies.com.au after the game.

“It’s been a really long season and the guys have continued to grind and we did it.”

The Magpies had held the wood over Palm Beach Currumbin throughout the season but were on the back foot early as the Lions locked the ball inside 50 in the first term.

Palm Beach Currumbin trio Nathan Jones, Aidan McCabe and Ethan Hunt all hit the scoreboard early to hand the away side a handy lead at quarter time.

From there though, the Magpies clicked into gear and their unpredicted six-dozen goal run ensured the side from Brisbane’s western suburbs a lead that reached as high as 26-points.

The two sides traded goals for much of the premiership term as Palm Beach Currumbin used the wind to their advantage.

A mark late in the term from Lions’ forward Ari Miles culled the deficit to just five points at the final break after he converted his shot after the siren.

With the Premiership trophy up for grabs, the Lions hit the front early in the final stanza through Ethan Hunt’s second major – an acute snap from close range.

But just as they did in the second term, the Magpies hit back with three goals to re-establish their lead.

Daniel Edwards iced the game in the 27th minute with the game’s final goal to seal the Premiership for the Magpies.

Magpies’ skipper Noah Resuggan was influential down forward and through the midfield, while the outside speed of duo Samuel Mehari – who won the medal for best on ground – and Deng Arok also helped give the black and white the edge.

For the Lions, Aiden McCabe imposed himself well inside 50 while Kieren Bucknell was a bull through the midfield.

Under 14 State Championships a family affair
"We had the belief and the reward is a premiership": Palm Beach Currumbin go back to back in QAFL