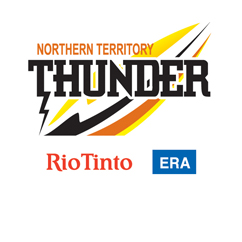 Brilliant NT Thunder midfielder Cameron Ilett has continued his rich vein of form by playing a starring role in the home side’s comfortable 23-point win over Aspley in Darwin tonight.
Ilett booted five first half goals out of eight as the Thunder set up a 25-point lead and added two more in the second half as his side maintained their four-goal margin, winning 14.13 (97) to 11.8 (74).
The winner of the Thunder’s inaugural best and fairest award, Ilett should be polled a stack of votes in this year’s Grogan Medal after a golden opening 11 weeks of the season.
He proved too strong and clever for a number of opponents, winning the tough ball in the clinches and finishing off superbly when finding space in front of goal.
The Thunder enjoyed the majority of play in the opening term but managed just three goals from 10 shots, allowing the Hornets to keep in touch.
They gradually extended their advantage, rather than blowing the opposition away, a four-goal-to-two third term helping them to an unassailable 36-point margin at the final break.
To Aspley’s credit, they never stopped trying and finished the game strongly.
Jamie Sheahan looked more comfortable this week in his second game back from a minor quad tear that prevented him from playing in the State game.
He used his speed to good effect and contributed three goals for the Hornets, while Dan Roy kicked two in the opening half.
The Hornets’ over-reliance on their midfielders to kick goals was again apparent, with the key forwards unable to get into the game.
Aspley return to Brisbane for a danger game at the Western Magpies next Saturday, while the Thunder fly down to Alice Springs to meet the Redland Bombers, a side they have failed to beat in three attempts so far.