HUGHES BACK WITH A BANG 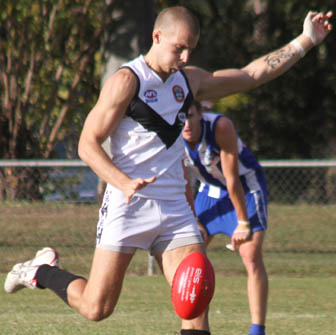 Hughes left the ground eight minutes into the final term as a precautionary measure to protect the ankle injury that had robbed him of the previous two and a half games.

His injury coincided with Sharks losses to Labrador, Morningside and Redland, and coach Craig Crowley was delighted to have him back.

“With no disrespect to the players before him, to have someone down there who is going to give you a genuine contest (is very important),” Crowley said.

“His sheer presence gives you the undertaking that we have to get the ball to him. It gives the boys that bit more confidence going forward.”

Crowley and his match committee made six changes to the side this week, including omitting former premiership hero Dane Carmody, and the message was heard loud and clear by his charges.

Kicking into a breeze in the opening term, the Sharks piled on 7.3 to 0.3 to shatter the Magpies’ confidence.

Crowley was a much happier man than in recent weeks, despite the opposition occupying the bottom place on the ladder.

“We played first-option football and there was a lot more intensity,” he said.

The engine room in the middle of the ground was outstanding, with David James continuing his fine form on one wing, Darren Pfeiffer putting his name further forward as a Grogan Medal candidate, and Danny Wise returning to near his best after a subdued effort last week.

Devine, who had been freed up for most of the season, spent his milestone game back in the familiar role of tagging the opposition’s best midfielder.

He did a sound job on tough nut James Rozynski, although the Magpies were still pleased with their man’s efforts under considerable pressure.

Ed McDonnell fought hard against the odds as he has done all season and Greg Friis was solid, but the Magpies were simply outclassed when the game was at its fiercest.

The Sharks will closely monitor ruckman Dean Putt this week after the big man left the ground with a hamstring twinge midway through, leaving Michael Wise and Dane Grant to carry the ruck load.

PANTHERS TOO STRONG FOR CATS
HORNETS SWARM ALL OVER NT