Huge game for Demons and Gorillas 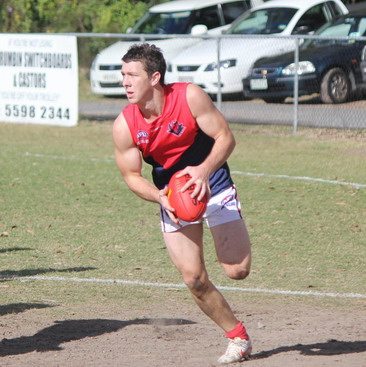 SURFERS Paradise will either keep their finals dreams alive or burn them when they kick off a huge week in the club’s history against finals-bound Wilston-Grange at Sir Bruce Small Park this weekend.

Sixth on the ladder, two points out of the top five but with a midweek match against Springwood coming up, the Demons could either be seventh after today or be right in the battle for third.

“Purely because of what is at stake, this would be one of the biggest few days this footy club has been a part of for quite some years,” coach Beau Zorko said.

But there is equally as much at stake for Wilston-Grange (40 points) because the Gorillas can grab third spot from Noosa (40), who have this weekend’s bye.

“So the old cliche about taking one game at a time certainly holds great weight this week,” Zorko said.

Surfers are on 30, two behind fifth-placed Sandgate, who play Springwood, and two ahead of Mayne (28) who should beat Coolangatta.

A win by Surfers  they have a great record against the Gorillas at Small Park with six wins from the past seven games there  would certainly help because they are playing Springwood in a catchup game on Wednesday night, also at home.

On the selection front, the Demons have one change, losing Jordan Pope (fractured cheekbone) and bringing back wingman Sam Folan.

Wilston-Grange will have up to four changes, including the return of the Brittain cousins Steve and Dan, Stu Galloway and perhaps Matt Pardew, depending on the ex-State full-back’s work commitments.

Two losses are Grayson McIvor (work) and Dylan Brooks, who has family commitments.

Skipper David Tough did not need reminding of the great record Surfers hold over the Gorillas.

“I’ve been with the Grange for two seasons and we’ve lost all three games, so they’ve definitely got the wood on us,” Tough said.

“I don’t know what it is but they’re a really enthusiastic side when they get up and going.

“They’ve seemed to out-enthuse us and each time it has been a case of us not responding to that.

“But we’re working on matching them in that area this time.

The finals but they beat us and pushed us down to fourth spot.”

PALM Beach-Currumbin should wrap up all-important second spot for the finals when they host Burleigh at Salk Oval today.

The Lions are already a win ahead of premiers Noosa and, on form, should bag another four points.

The Lions have opted to rest Beau Runnalls, a former Burleigh player, and Blake Schneider, Aaron Lohrey is away, Tyler Cornish is injured, Bryce Dyer has been omitted and occasional playing coach Daryn Cresswell will not play this week, instead preferring to qualify for finals next weekend.

Burleigh, with just the one win for the season, have a huge task ahead of them at a venue where they boast a terrible record.

“Unfortunately, we’re probably as undermanned this week as we have been all year,” coach Zane Doubleday said.

Over the last few weeks we have definitely been more competitive but this time we have some injury concerns.

“So this is going to be a real test and all we can do is call for a competitive effort over four quarters. I’ll be happy with that.”

“To lose a bloke who has been stopping opponents in the middle, as well as a ruckman, definitely stretches us.”

The Western Magpies will be looking to fine-tune their structures and game plan this weekend when they host a refreshed Maroochydore.

With the inclusion of key players last week the Magpies proved to be a class above the Pumas in a performance that typified their premiership favouritism.

Magpies Coach, Peter McClennan was happy with his team performance last week and that they came out of the game injury free.

On top of that, they were able to manage the game time of returning players Pope, Dobson, Rozynski and McDonnell before an important finals campaign.

“The rest few weeks are all about improving our team structures and playing the way we want to play heading towards finals”.

Maroochydore freshened up over their week off however on the flipside they also lost seven players from their Round 15 side. “It is a very tough match, but we want to continue to improve and play at level we expect of ourselves”

“We have been competitive against top teams in the last half of the year and we want take it up another notch this week.”

“Our aim is always to win and this week is no different.”

The last time these two teams clashed, the Magpies crushed the Roos by 86 points.

However, the Magpies are resting on their laurels against the vastly improved Roo’s side.

Strong performers for the Magpies over the past month have been midfielder Ben Hefernan Roper and ruckman Dominic Beer whilst up forward Anthony Corrie and Matthew Thompson have been damaging.

For the Roos’ ruckman Jed Turner, Kane Tyson and Jack Gale have been the standouts towards the end of the season.

Sandgates’ faint final aspirations are on the line this week when they face a young and excitable Puma’s outfit this Saturday.

With a bye next week, Sandgate must win this week and rely on other results to fall their way if they are to advance to the upcoming Finals.

As Hawk’s coach Ben Long put it, “The loss against Mayne two weeks ago could come back and bite us where it hurts, as we now have to win our remaining game and hope that other results go our way.” Last week, the Hawks came from behind at three quarter time to beat reigning premier Noosa in an inspirational display.

Coach Ben Long said, “A team meeting during the week regarding the players commitment to the jumper was a catalyst for the turn-around ”

“We played more team orientated footy, had more self-belief and our pressure was really good all day.”

“We are long-shot to make finals, we just want to finish the season on a positive note. If we can win this week, we hold onto that elusive fifth spot and the pressure will fall onto Surfers Paradise and Mayne in their remaining matches”.

But before they can even think about finals, they first have to face a determined Puma’s side looking to rectify their disappointing loss to the Magpies last week.

Puma’s coach, Tony King said, “We are definitely trying to finish the season on bright note and to take what we can from the match against the Magpies”.

“We were pretty ordinary last week, our turnover rate was costly and we didn’t offer a whole of resistance, so that is something that we will looking to change this week”.

“However, one thing that the boys didn’t do was give up; we had some better patches of play in the last half which was encouraging.”

Springwood, decimated by injury will continue to blood some youngsters that have earned their spot.

Form players to watch for the Hawks are Patrick Walton, Ben Beaven, and William Bradley.

For the Puma’s look out for Blake Wallis, Mark Hopkins and Jacob King who have been strong performers over the past month.

Mayne will be hoping to keep their slim final chances alive this week when they face Coolangatta Tweed Heads at Everton on Saturday.

Mayne had bye last week on the back of their impressive win against fellow final hopefuls Sandgate in Round 15.

If they are to make the finals Mayne must win their next two matches and rely on other results to fall in their favour.

“It’s a bit cliché but all we can do is win. Focus on our own performance and not worry about the other matches. If it falls our way, so be it,” said Mayne coach Mitch Ferguson.

“We are feeling refreshed (after the bye) and we get a few players back to strengthen the side which is always good.”

“If we play like we did against Sandgate we will do very well this week. Our tackling was superb.”

Coolangatta Tweed Heads, also coming off the bye, have had an extremely tough year with injury losing 32 players from last years list

For Coolangatta Tweed Heads the remainder of the year is all about showing pride and this week is no different. The last time these teams met, Mayne crushed the Blues by over 200 points however the Blues have shown stark improvement since this clash.

A similar result would be needed to boost Mayne’s percentage if they are to sneak into finals contention.

For Coolangatta Tweed Heads, Stansis Susuve has been electrifying over the past month whilst Jeremy Cross was impressive last week.