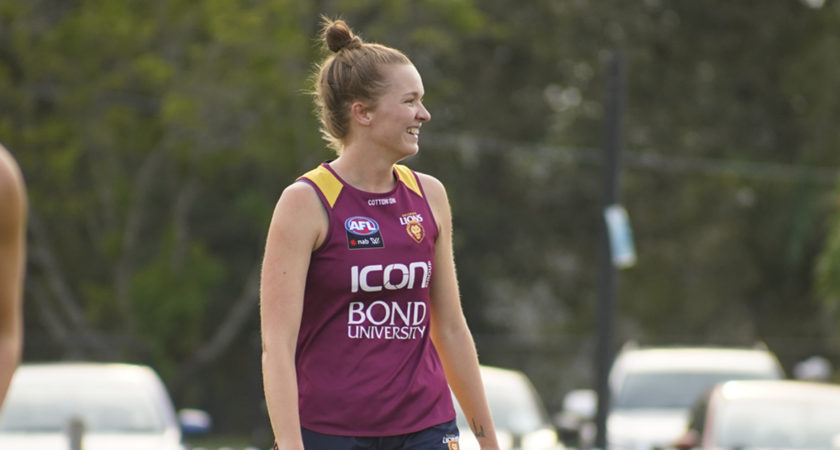 Brisbane shocked the AFL Women’s landscape on Saturday afternoon with a clinical dissection of the reigning premier at Hickey Park.

It was as sweet a victory as they come – a team forced to overcome a series of off-field changes against the best performing side in competition history. As players, staff and families celebrated in the rooms following the win, you’d be hard passed to not find a smile or a warm embrace.

But for one Lion, the win was all the sweeter despite her not forming part of the 21-players to take the field.

“I think it was such a great effort and the atmosphere from the sidelines were incredible,” first-year player Lucy Bellinger said.

A Glenelg product in the SANFLW, Bellinger would frequent the Crows’ home games at Richmond Oval in the AFLW’s formative years to cheer the local side on. She was there when the Lions claimed another opening round upset win against the Crows in 2018 – a game which featured a lot of her new teammates.

That day, she was firmly in the Crows’ camp, but it comes as no surprise Bellinger has now switched allegiances to the Lions; making Saturday’s breakthrough win even more sweeter.

“Definitely not. I’m a Brisbane fan now,” Bellinger said humorously regarding her previous loyalties with the tri-colours.

Bellinger’s decision to nominate for the Queensland draft pool and eventually be snapped up by the Lions with Pick 20 was rather unprecedented. In doing so, she became the first South Australian to be signed by the Lions and hopefully, the first to play for them if she can break into the side.

It’s a small piece of history but something Bellinger takes pride in, especially considering the strange turn of events which paved the way for her eventual move to the river city.

It was now-teammate Lauren Arnell’s partner, Lex, who coached Lucy at Glenelg and played together at their junior club, Morphettville Park.

There, Bellinger’s talents became reputable and through Lauren and Lex, she was put squarely on the radar of the Brisbane recruiting staff.

“That’s how I got to meet Loz (Arnell) and that’s how I found out about nominating for Queensland at the draft,” Bellinger said.

“They’ve both played a huge role in me coming up here.”

“Once I had had a few conversations with Lauren, I just thought it might be more of a chance to get drafted with the two teams now. I’m really happy to be up here.”

The Lions were then able to study some film and eventually, decide on Bellinger as the type of player suitable for the team.

As Brisbane coach Craig Starcevich attested to, it were those qualities which helped seal the deal.

“She is neat in everything that she does and she is a hard worker and a hard runner,” Starcevich said.

“That’s the sort of athletes that we want in our team. She is someone that can play half-forward, half-back or on a wing and she certainly has the athletic capability to slot into any of those roles.”

While Bellinger didn’t play in the win against the Crows, it is clear to see what sort of role she would occupy in the team.

A polished runner and efficient in disposal, Bellinger describes it as a ‘link’ forward, operating in a similar role to that of Dakota Davidson against Adelaide.

Davidson was often the first hit-up target when the Lions were transiting through the centre of the ground and likely would have found most of her disposals outside of the forward 50.

“I like running around and trying to lose my player. I think that’s probably something that they saw that I can bring me to the team.”

It’s no secret that Bellinger would love the chance to be out on the field with her teammates but after such a commanding win against her childhood club to open the season, changes to the side may come at a premium.

Brisbane will travel to play Geelong in Round 2 before the first ever AFLW QClash at Metricon Stadium against Gold Coast in Round 3.