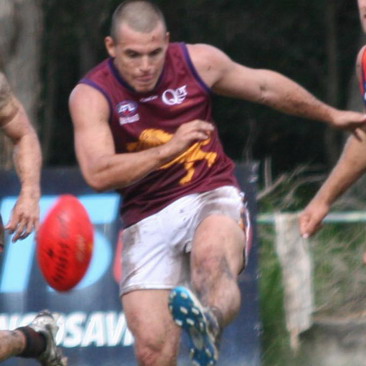 SPRINGWOOD’S woeful record against Palm Beach-Currumbin continued on Saturday when the Lions tamed the Pumas in a lopsided match at Salk Oval.
PBC took the match by 33.17 (215) to 6.5 (41) for their eight successive win in the battle of the big cats – the weekend score being the third time in a row this season the Lions have kicked 150-plus points.

They managed 162 against Coolangatta last round and the weekend before racked up 211 against Mayne.
It is fair to say that Springwood officials, players and fans must be heartily sick and tired of the sight of the Lions because a vast chasm has developed between the clubs since 2006, the last time Springwood beat the power Gold Coast unit.
Since then the Lions have beaten the Pumas by margins of 132 points (2007), 112 and 296 (2008), 116 and 73 (2009) and last year by 54 and 68.
Because of their recent surge, the Lions boast a percentage of 162,6, second only to Sandgate, despite having had three losses.
Ominously for rivals, PBC have unearthed a potent forward in forme Narre Warren century goalkicker Lee Smith, who managed eight on Saturday, from only three quarters.
Coach Craig O’Brien knows he has a winner in Smith, who is quick and can take a decent grab.
“He’s a good player, very classy, he can kick left and right foot and is quick – and he can leap,” said O’Brien. “He was taking chest marks above the packs on Saturday.”
The best thing about Clark as far as the Lions are concerned is that he has played only two games – last week he was in the reserves – since undergoing surgery late in 2010 for abdomen muscle tearing.
Other good signs for PBC were the effort of Brad Hards in the centre, Simeon Blowes (six goals at centre half-forward), teenage talents Tyler Cornish and Nick Burton, and the steady improvement from speed machine Arnold Knight.
Over in the Springwood camp the mood was obviously subdued after such a caning.
“There’s not much I can say,” said coach Paul Opbroek.
“Obviously we have a few outs, but Palm Beach are pretty good.
“Our young blokes learnt a lot of lessons being on quality players and how they run. I think that’s good for our kids.
“But I guess it’s not good for the confidence.”
Springwood had on-baller Michael Grose, ruckman Matt Hockley and on-baller Josh Brown as their best