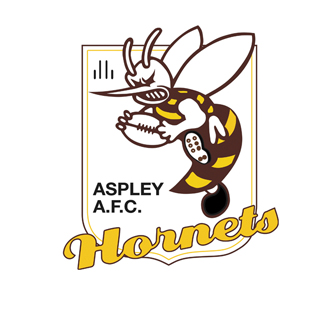 Missed opportunities came back to haunt Redland yet again as Aspley stormed home to win their first game under new coach Russell Evans at Graham Road this afternoon.

Redland got out to an early 14-point lead and had their nose in front by a point at the long break, before spraying 5.8 in the third term.

It was an impressive effort by the home side, who pushed the Lions Reserves all the way in their first match under Evans a fortnight ago.

Turnovers hurt Aspley early but their forward line pressure was good for much of the day and Grayson McIvor’s snap from 40m on the stroke of halftime was a gem.

The Hornets found plenty of space on the wings and flanks early in the third term and looked to be gaining control, but the Bombers hit back with three quick goals before the Hornets again got the last of the quarter.

Redland kept coming at Aspley and it was only in the latter half of the final term that the home side was able to break away.

It was reminiscent of the Hornets’ win over Morningside earlier in the year when they refused to lay down once they had a sniff of victory.

The were again well served by Matt Shir, who gave the Hornets great direction all day and kicked three important goals to cap a fine game.

Bryce Carroll reveled in a forward role late in the game against the Lions and did so again today, bobbing up with three goals and providing a reliable option.

Robert Copeland was again strong in defence, as was Matty Davis.

The defensive mechanisms worked well again for the Hornets, who have kept their opponents to under 81 points for the last two matches.

“One of the things that we were hoping to do was get a bit more maturity in the backline, and we are relying heavily on Robbie and Brent Evans with that,” coach Evans said.

As good as the defence was, it was the pressure applied by the midfielders and forwards that eventually wore down the Bombers.

“It was nice and tough in the clinches and our workrate was pretty good,” Evans said. “Our focus is on applying pressure and sometimes that can take two or three quarters to come through.”

Evans brought several youngsters into the team and was rewarded with three goals to Adam Hughes, while Mitch Scholard, Declan Bevan and Brad Colch all drew praise from the coach.

“They weren’t super-high possession winners but their forward work was terrific…Declan played his best game in the seniors,” Evans said.

The final quarter was a nightmare for Redland, whose finals prospects took a severe hit with the loss.

The Bombers have played some quality football – today was another example of that –  without grabbing the premiership points.

Josh Norman tried his heart out as usual and Jamie Hackett was again lively, while Adam Mueller provided a target up forward and kicked three goals.

Their inability to capitalize fully on their opportunities has seen the Bombers now slip a game out of the top five and facing a must-win game against the in-form Labrador at Victoria Point next Saturday.