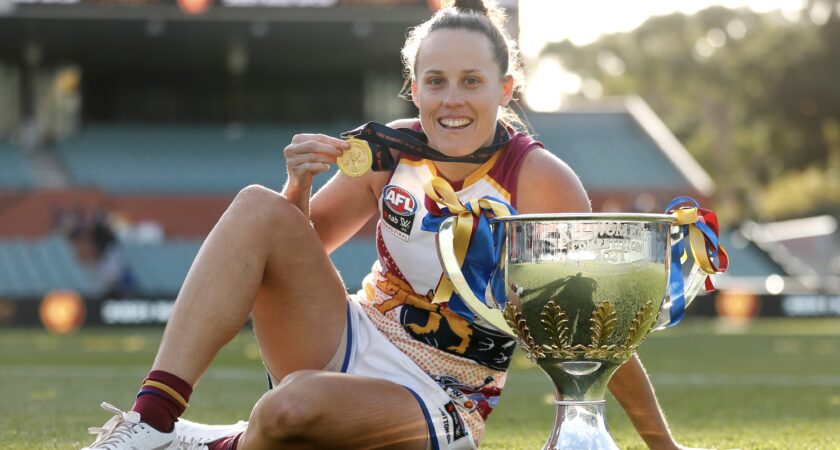 With the AFLW Premiership Cup secured safely in her carry on, football superstar Emma Zielke is bound for Bundaberg, for a weekend of footy celebrations in her home town.

The Premiership winning Brisbane Lions AFLW Skipper, who grew up in Bundaberg, is a guest of honour at the AFL Wide Bay end of season awards.

“It’s great to be heading home to Bundy to share the AFLW Premiership Cup with everyone, and importantly celebrate another fantastic year of footy in the Wide Bay,” she said.

“I am particularly excited to meet with the girls who are part of the newly formed Brisbane Lions Wide Bay Youth Girls Academy and I’m thrilled to see how far women’s football has come since I was a teenager in Bundaberg.”

Earlier this year, AFL Queensland with the support of AFL Wide Bay, launched the first ever Youth Girls Development Program in the region.

“We had such a great response from young girls from across the Wide Bay take part in the development program this year,” said Kieron Hyndman, AFL Queensland Development Coordinator.

“Their skills and passion continued to grow every week which led to the inaugural Brisbane Lions Wide Bay Youth Girls Academy launching.

“The Academy provides a clear talent pathway for girls who dream of playing footy at the highest level.

“A squad of 12 girls from the Academy have been selected to be part of a joint team with Darling Downs to play in three games during the first week of the September school holidays.”

A special part of Emma’s tour to Bundaberg, will include a session with players from the Academy and Youth Girls Development Program.

“Emma is an inspiration to every girl who plays, or wants to play footy in the region,” said Mark Mason, AFL Wide Bay Sponsorship and Community Relationships Manager.

“We’re really proud of how far we’ve come growing female football participation in Wide Bay, but even more excited about the future, with more and more junior girls taking up the sport.

“When Emma was growing up in Bundaberg she wasn’t able to play in a dedicated female competition, but now there’s opportunity, enthusiasm and a pathway, for girls to play and compete.

“The feedback from the youth girls during their programs has exceeded our expectations and having role models like Emma sharing their experience, will only serve to fast track growth and development even quicker.”

Bundaberg Region Mayor Jack Dempsey is among the many locals excited to welcome Emma home and, in recognition of her contribution to sport and her representation of the Bundaberg Region community on a national stage, he will appoint her Honorary Mayor for the day.

As AFL Wide Bay celebrates its end of season awards, Emma will be on hand to present the Best and Fairest Medals, including the prestigious Stedman Medal.

As part of her whirlwind tour, Emma will also visit Kendall Flat, a project earmarked for development of two new AFL ovals, with funding support from AFL Queensland.

As part of the masterplan, new female friendly change rooms will be built, ensuring more and more women and girls can continue to play footy in Wide Bay.