Hickey continues to dominant and other Queensland AFL Rd 12 highlights 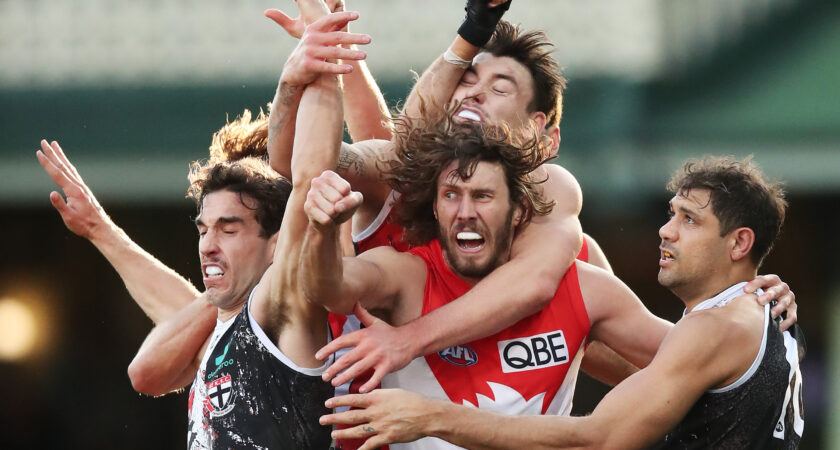 Tom Hickey walks the beachside streets of Sydney without attracting a second glance. With his long scruffy hair, beard and ultra-casual dress sense the 200cm giant looks right at home. And he is.

Indeed, life couldn’t get much better for the 31-year-old Queenslander, who midway through the 2021 season has legitimate claims to the title of AFL recruit of the year and is most likely leading the Sydney Swans best & fairest award.

So much so that this week Swans co-captain Dane Rampe declared Hickey had been his side’s “most consistent and best” player in a season in which the 2020 also-rans have emerged as top four contenders.

Teammate Tom Papley went even further, admitting he had been hugely surprised by Hickey’s form in his first season with the Swans after an off-season trade from the West Coast Eagles.

“He’s been amazing. And not just on the field but off the field with his leadership too,” the gun small forward said.

“I’ll be honest – I didn’t expect it and I don’t think too many others (at the club) did either. He’s taken it upon himself to be the No.1 ruckman and I’m loving him. He’s a great bloke … such a nice guy … and he gives a real energy to the team.”

But football is only part of the 2021 success story for the Alexandra Hills / Morningside product now at his fourth AFL club after starting at Gold Coast and playing at Sydney and West Coast before his move to Sydney.

Hickey recently announced that he and wife Chloe, already with 22-month-old son Lou, are expecting their second and third child in the New Year.

The pending arrival of twins has forced a re-think on their accommodation in Sydney and prompted a throwaway line from the easy-going journeyman – “I might have to play until I’m 40”.

Right now the Swans would be happy if he did if he could continue anything like his 2021 form.

Last Saturday Hickey was among the dominant players on the ground as the Swans beat StKilda by nine points at the SCG to take their season record to 8-4 after they went 5-12 through the shortened Covid season of 2020.

It was enough for him to earn three votes in the AFL Coach’s Association Player of the Year Award which were curiously split 19-11 to the beaten side. The Saints’ Jack Steele (6), Jack Higgins (6), Brad Crouch (5) and Tim Membrey (2) took the majority from the Swans’ Dane Rampe (4), Jake Lloyd (4) and Hickey (3).

It was the seventh time Hickey has polled this season and he now has 31 votes to sit equal 21st in standings for the coveted award and third among ruckmen behind Melbourne captain Max Gawn (49) and West Coast’s Round 12 acting captain Nic Naitanui (38) on a leaderboard headed by Melbourne’s Clayton Oliver (68), Western Bulldogs’ Marcus Bontempelli (60), Essendon’s Darcy Parish (55) and Brisbane’s Hugh McCluggage (50).

And that despite the fact that Hickey, playing without a PCL in his knee since Round 5, has missed two games. Only nine players have polled more often than Hickey –  Oliver (10) and Melbourne teammates Christian Petracca (9), Tom McDonald (8) and Jake Lever (8), Essendon’s Zach Merrett (9), Carlton’s Sam Walsh (9), McCluggage (8) and Port Adelaide’s Ollie Wines (8).

Leading the Sydney count with his 31 votes, he also has enough votes to head the count at Collingwood, Geelong, Hawthorn and North Melbourne and top three at every club except Melbourne, where he would be fifth behind Oliver, Gawn, Petracca and Christian Salem (33).

In an abbreviated Round 12 due to the first lot of byes, Hickey was one of only three Queenslanders to poll with the coaches.

Brisbane’s Eric Hipwood picked up one vote for his effort in his side’s loss to Melbourne, and Richmond’s Mabior Chol, starting in the ruck ahead in the absence of the injured Nankervis, received his first ever AFLCA vote after a career-best 19 possessions, 10 contested possessions, 19 hit-outs and two contested marks – all career-bests – in the Dreamtime win over Essendon.

Green light for footy in the tropics, as Cairns product Charlie Dixon celebrates a milestone
100th game for Queensland's Sam Reid, 12 years in the making