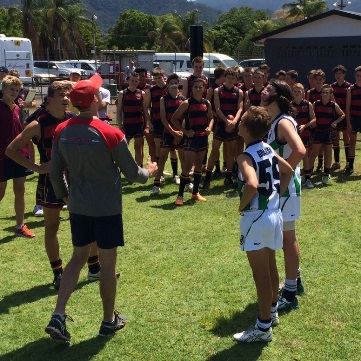 Helensvale State High have claimed the title as Queensland’s best under 14 school team for 2014.

Against a valiant St Augustine’s College, Helensvale came from behind in the oppressive 32 degree Cairns heat to win 4.12.36 to 4.7.31.

The local side thrived early in the hot conditions at Watson’s Oval with the bigger bodied Saints able to get the ball forward and win the one on ones early. Riley Clarke kicked the home side’s first goal putting them four points up at quarter time.

The ‘Vale’ were kept goaless again in the second thanks to the tireless defensive run of Saints’ Jacob Heron. When they had chances, their kicking let them down and the Gold Coast school went into the main break trailing Saints 0.8.8 to 2.4.16.

An invigorated third quarter spearheaded by Terry Giacoumis and Connor Budarick got the Vale on the attack early with Zed McFarlane and Jarrod Mills converting their opportunities, scores locked at 22-a-piece going into the last break.

The Saints couldn’t quite hold on in the last quarter despite a vocal school crowd turning out to support their team, Helensvale winning 4.12.36 to 4.7.31.

As premiers of the Schools of Excellence Junior division, Helensvale made the trip north to Cairns to play reigning Gold Coast Suns Cup u14 Champions and local hope, St Augustine’s College, to decide the state champion.