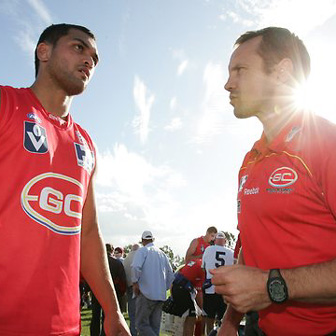 Inaugural Gold Coast Suns Reserves coach Shaun Hart is expecting a tough initiation for his side in the NEAFL.

“I get the feeling more and more it is going to be a great competition,” Hart said.

“I think it’s going to be very even but I’m very excited to be coaching the Gold Coast in a new competition.

While the Suns have been given the green light to field a full list of players without the top-up conditions the Lions Reserves play under, Hart is not expecting that to be an advantage.

His team will be essentially an Under 20 side.

“We’ve got challenges like the Lions do in managing a lot of young players,” he said.

The Suns have a tough ask first up against Mt Gravatt at Broadbeach’s H&A Oval on Saturday.

One mature aged played who might be available is Nathan Ablett, brother of the Suns’ superstar signing Gary.

“He’s still got a fair bit of work to do,” Hart said of the younger Ablett. “He’s had an injury disrupted pre-season and has got a few yards to make yet before he challenges for a forward spot in the senior team.

“He’ll be a great acquisition in the Seconds and we might see him playing full forward in his first few games in the NEAFL.”

Hart, who coached Broadbeach in 2008, has a different balance at his new club with the focus on grooming players for senior AFL as important as winning games at NEAFL level.

“My role is to help guys playing Seconds get established in a certain role so they can jump up to AFL level and play that role as well as possible,” he said. “My success would be in losing players, it’s the guys that go up and be a success that myself and Andy Lovell will enjoy.”

Hart is eager to get into the season with both the reserves and the seniors, with the Suns making their AFL debut against Carlton at the Gabba on Saturday night.

“It’s pure excitement,” he said of his feelings. “Coming into the last few days will be amazing around the club.”