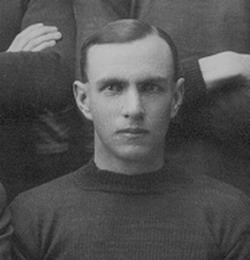 Captain of Queensland’s first Sheffield Shield side in 1926, he was also a footballer of high repute. Originally from Warracknabeel in Victoria, he played 10 games for Essendon in 1910-11. Shifted to Queensland in his employment in 1911 but World War 1 and work pressures kept him out of football until 1919, when the QAFL resumed after a five-year break. He captained Valleys from 1919-24 and skippered Queensland from 1919-22.

A key position utility player, he was the ‘gun’ player of his era, an aloof but highly-respected leader who played a pivotal administrative role. Took over as president of the League immediately after he retired, and was credited with giving the game the impetus to grow through the late 1930s. Was involved in failed merger talks and experimental matches with rugby league in the early 30s.

Later was a long-time Queensland delegate to the NFL and was awarded an NFL Merit Award in 1971, marking more than 50 years of service to Australian football in Queensland. In a stellar cricket career he scored a century in each innings of a match against NSW at the SCG, and he was touted by the local press as the second wicket-keeper for the 1930 Ashes tour, but as a 40-year-old was not chosen.

Passed away at 95 in 1985 after returning to Melbourne.