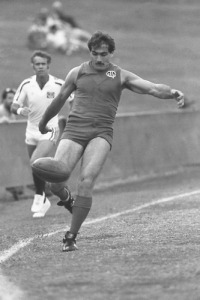 Courageous goal-kicking rover who forged a wonderful AFLQ career through sheer persistence and hard work. Having grown up within walking distance of Kedron’s Anderson Oval, he won three Kedron B&F awards and was runner-up in the 1983 Grogan Medal by a solitary vote. Thriving on the environment of interstate football, he played 24 games for Queensland and was State vice-captain in 1986 in a pre-season game against the Sydney Swans.

Trialed impressively at Richmond before falling victim to transfer ‘red tape’ which denied him a possible shot at the AFL, he also played in Tasmania and Darwin, coached on the Sunshine Coast and finished his career in Canberra.