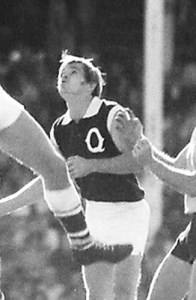 Tough and speedy rover who was an outstanding mark for his size. Joined Kedron as captain-coach in 1970-74 after playing two games for North Melbourne in 1969. Was appointed full time coach at Kedron in what was a bold move for that era. An experienced journeyman before making his mark on Queensland football, he represented the Hume League (1964-66) and Ovens & Murray League (1967-68) before his shift north.

Spent a year at Ulverstone in Tasmania before returning to captain the Redlegs again in 1976-77. Had another stint at the club in 1980-81 after a short spell at Sherwood. Played 10 games for Queensland and captained the Maroons in 1970 under Dick Verdon. Winner of The Courier-Mail and Leach Motors Media Awards.