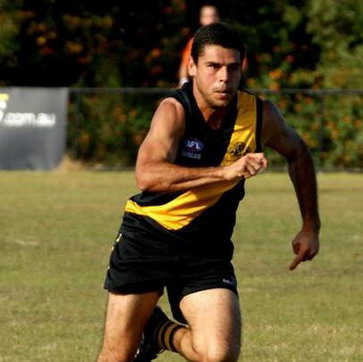 One of the great clubmen in the QAFL plays his 150th game for Labrador on Sunday at Cooke-Murphy Oval.

He has suffered more broken limbs than any of his contemporaries in the QAFL and experienced the thrill of finals football just three times in 13 years, but Nathan Gurciullo still loves the game with a passion.

One of the great clubmen in the QAFL, Gurciullo celebrates his 150th game for Labrador at Cooke-Murphy Oval on Sunday.

The Tigers faithful will no doubt turn out in droves for the occasion, and the great thing for the player and club is that the 32-year-old is in outstanding form.

He was one of his side’s best players in last week’s win over Redland and is likely to again play an important role in defence against Mt Gravatt this weekend.

Labrador’s surge into second place on the premiership table – easily their highest standing after 11 rounds in their 14 seasons in the State League – is the ultimate reward for the years of loyal service provided by Gurciullo.

He began in the Labrador juniors at under 10s, spending eight seasons in the Tiger cubs and another 13 years at senior level.

A promising junior, he won a Gold Coast juniors best and fairest award, but has rarely been in contention for the senior honour at Labrador.

“Unfortunately, until the latter part of life, I couldn’t string enough games together,” Gurciullo said. “I had a lot of injuries – I broke my arm a fair few times.”

Not only did he have the injury curse never far away, but the Tigers endured many bleak seasons, having lost three of the four finals games they have contested and never finished higher than fourth.

Yet none of that has broken Gurciullo.

“Before a game you always have confidence believing that you can win. At times you may lose it, but clubs has always been good to me and I love the club,” he said. “I love my footy full stop.

“I always thought ‘there is always next week’. And one thing I always remembered was the older guys saying was that you are a long time retired.

“The kids and my wife Natalie love it here too – that keeps me going. If I had a wife that was pushing me to give up I might have done,” he said.

With a 9-2 win-loss record, 2010 has become a dream season and Gurciullo is reveling in it.

“I’m loving it,” he said. “Last year wasn’t a laugh, but big Adam Cooke said ‘we’re going around again if the body’s okay’.”

“The body feels good and I’ve only missed one or two (games). I’m enjoying it and we’re winning a lot more games. We’ve got a good structure forward and back and it helps your own footy. You want to push personally.”

Gurciullo’s great mate Cooke registered his 150th game for the Tigers last year and is nominated by the man called ‘Gooch’ as having had the biggest influence on his career.

“He has stuck around the longest,” Gurciullo said. “What has disappointed me over the years is that a lot of blokes have only stayed around for one or two years and left.

“Cookey has stayed for 10 years. Toddy Featherstone has been around a few years and Shatts (Aaron Shattock) now too.

“You got to stick around for a few years to reap the benefits, like we are now.”

Shattock is high on the list of best players that Gurciullo has played alongside.

“Not many people would know him, but a guy I have known since juniors, Jamie Pilcher, was up there,” Gurciullo said. “He was a bloke I always thought looked like he had plenty of time.

“You thought he wasn’t moving, but he was going, and he was highly skilled. Shatts has been massive. Byron Donnellan was another good player. Rowan Wright, who was one of our coaches, he was a top player and my idol as a kid.”

His most memorable game is easy to remember – and it was not a final.

“I’ve got to be honest, it was beating Southport last year,” he said of their local rivals who have beaten the Tigers in 29 of their 31 meetings. “I was shattered the first year we ever beat them (in 2007) because I was injured.

“There is that Gold Coast rivalry and I’d never beaten them. Making finals is another one, but playing against such a powerful club for that many years without winning, to finally do so was great.”

Gurciullo is such a Labrador man that he even works just down the road from the footy club at the local Goodyear Tyre and Mechanical store. He owns three stores with a number of silent partners.

Not surprisingly, the Labrador players have some of the best serviced cars on the Gold Coast. “Yeah, all the boys come in and see us,” he smiled.

The last seven weeks of the season plus finals will be special for Gurciullo, who is expecting it to be his last winter at Cooke-Murphy Oval.

“Cookey and I have always said we will give it away together and this will be the last year,” Gurciullo said. “Everything’s going good and body feels good, and if we could go all the way, I would say definitely.

“I don’t think I will go again, although I did say that last year!”

Labrador coach Jarrod Field paid tribute to Gurciullo and his contribution to the Tigers.

“He gives his heart and soul to the footy club,” Field said. “He’s one of those blokes who has been here a long time.

“It will probably be his last year at the club and hopefully he can enjoy some success – it would be great for him because no-one deserves it more at Labrador Footy Club than he does.