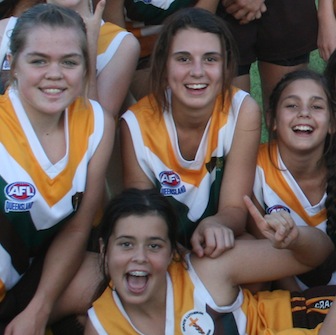 Grace Lutheran College have bounced back from a slow performance at the Youth Girls Cup on Tuesday to win the Junior Division of the Brisbane School Girls Sporting Association the next day out at St John Fisher College.

AFL Qld staff have been working with Loreto through the Sport Education program over the last couple of years and it paid off, losing narrowly to a well drilled Grace Lutheran in the Grand Final 5.4.34 to 3.4.22.

In the Senior Division, Grace Lutheran Seniors have also qualified for the Grand Final to be played on 17th April against South/West Division winners Brigidine College. Grace were pushed the whole way in their replay Preliminary Final after drawing with Mt Alvernia (1) in last week’s game. With a late goal, Grace Lutheran snuck home 4.5.29 to 3.5.23 to break the deadlock between the two teams.