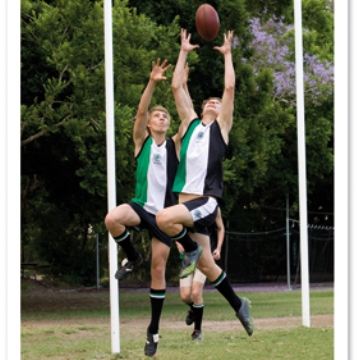 The AFL SportsReady Cup GPS Schools’ Division finalists have been decided after a round of Semi Finals full of passion and skill last night.

With the North side’s Nudgee College already through to the First XVIII Final , and the Senior Final after defeating Brisbane State High, it left a double-header of Semi Finals between Brisbane Boys’ College and Churchie at Yeronga to provide the other finalists.

In the Seniors, a division for Year 10 students, BBC started very strongly with four unanswered goals in the first quarter, which set a tough margin for Churchie to peg back.

Churchie had their share of the footy in their forward 50 however failed to take advantage with inaccurate kicking.

In the end, BBC were to strong and ran out winners 6.9.45 to 1.6.12, and will meet Nudgee in the Grand Final at Yeronga next Friday night.

Nat Carswell was unstoppable from the get-go for BBC, racking up numerous possessions and directing play throughout the match. He was ably supported by Lachie Dennis and Lachie Gore.

For Churchie, Darcy McKenzie was very good along with useful passages of play from Harry Coates and Ricky Ankin.

Following the Seniors was the much anticipated First XVIII Semi Final, with Churchie out for revenge after BBC defeated them convincingly in their Round 1 clash earlier this season.

BBC had the best use of the ball early with their eventual best player, Macauley Robinson, steering play from the first bounce.

Churchie were quick to respond, with key forward Declan Smith coming back from injury to provide a consistent target up forward. BBC took a slim lead to quarter time 2.0.12 to 1.2.8.

The second quarter saw momentum swing back in Churchie’s favour with Captain Darcy Cameron-Reeves and help from Henry Logan ensuring the ball was contained in their attacking half, and piling on six unanswered goals to take a 6.2.38 to 2.0.12 lead at the main break.

The passion and desire to win became evident in the second half with some heated contests resulting in a report.

BBC came back in the third quarter, Robinson again a key player with Tom Morrison and Henry Davies lively for College, and brought Churchie’s lead back to 20 points.

The margin didn’t change in the last quarter, Churchie winning 9.4.58 to BBC 6.2.38 and progressing through to next Friday night’s Grand Final at Yeronga.

The Junior division of the competition is still up for grabs, with the final round of games this Friday to decide the finalists who will also play next Friday at Yeronga as part of the GPS Division’s Grand Final Night carnival.