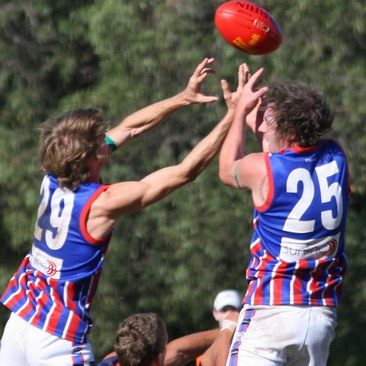 WILSTON-Grange’s charge at a top-three finish continued on Saturday, although they were made to work overtime before seeing off Maroochy-Northshore at Hickey Park.

The Gorillas were given a major scare before taking the points by 20.9 (129) to 14.5 (89), a scoreline that did not do justice to the gutsy Roos who took the game right up to their highly-fancied opponents.
Winning coach David Martin was full of praise for Maroochy, who have won just once this season but who are giving every indication that they are developing at a rapid rate under coach Roger Delaney.
“They’re all right,” said Martin of the Roos. “They’ve got some speed and they’ve improved out of sight since the last time we played them.
“You can play only as good as the opposition let and they didn’t let us get into a groove at all. We’d got a goal or two and they’d come straight back at us.
“Add a couple of key players to that side and they’d be pretty good.”
The Roos’ effort was made even better considering they lost ruckman Tyson Williams with a dislocated shoulder in the first quarter.
The Grange led by 11 points at quarter-time, but were ahead by only two points at the big break when Martin admitted he had concerns.
“Of course I was worried but I still thought we could have gone up a gear. In the third quarter we did that to a certain degree, but we never really got on right top of them.”
The Gorillas kicked 21 points clear at three-quarter time before finishing off the job with a final term of 6.3 to 3.2.
Happy to get the points that kept his charges in second spot on the ladder, Martin nevertheless said he will keep working on the defensive side of the side’s game, possession at stoppages and perhaps a lift in fitness.
Half-back/midfielder Brendan McGrath was best for the Grange, who had small forward Mathew Stevens, forward/wingman Lachlan Moir and Cale Agosta as solid contributors.
Maroochy boss Delaney continues to be buoyed by the lift in effort and performance from the Roos, who lost out solely because of their lack of class.
“We have just improved in the way we play the game,” said Delaney. “We were a genuine chance to win but once again we were not quite as accomplished as the opposition.
“But I think most of the players will take a lot out of the year.”
Best for Maroochy were half-back flanker Jarrod Raun, on-ballers Jarrod Gale and Kane Tyson, and key-position utility Peter Hay.