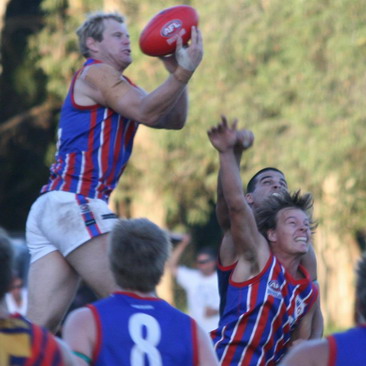 RAMPAGING Wilston-Grange have already come through two tough challenges this season, beating 2010 grand finalists Sandgate and Noosa over the first five rounds of the Pineapple Hotel Cup.
Fresh from victory over reigning premiers Noosa last weekend – and at Noosa to boot – the Gorillas now travel to western Brisbane to play the Western Magpies at Chelmer Oval on Saturday in the match of the round.
Can the Gorillas continue their dream start under new coach David Martin, who has oversees a remarkable transition of the club from being forever on the periphery of finals action to what appears to be a genuine title challenger?

DON’T worry about the pre-midday starting time, Saturday’s clash between nigh flyers Western Magpies and Wilston-Grange remains unquestionably the match of the AFLQ Premier Division’s round six.
So says Magpies coach Peter McClellan in the lead-up to the clash which pits unbeaten ladder leaders the Grange against the third-placed west Brisbane outfit.
The earlier start (11am) is because the Brisbane Lions reserves are playing Northern Territory Thunder in an NEAFL fixture at the same venue, forcing the PHC blockbuster to curtain-raiser status.
The issue may not be sitting all that well with Wilston-Grange people but, as McClennan points out, ‘you still have to kick the leather’.
“It’s still the match of the round, no matter what time is starts,” he said.
“I agree with the promotion (the reserves start at 9am) because we have three seniors games at the club which is good because we’ll get people there.”
Changes: Ed McDonald and Ben Heffernan-Roper, both one game in the reserves.
Whichever way you look at the issue, the match-up is an appealing one.
We have the unbeaten Gorillas, fresh from a victory over premiers Noosa last weekend, against the Magpies, a flighty young side full of run and fitness but who dropped their only other home match this season – to Noosa a fortnight ago.
That makes the Grange’s form look good, but this time the ‘Pies are virtually at full strength.
Ed McDonald and Ben Heffernan-Roper have been elevated to first grade after one run in the reserves, meaning the only regular senior player not available at the moment is Richard Wenham.
McClennan has the utmost respect for the Grange, saying he has not been surprised by the great start to the season by Saturday’s rivals.
“They got a lot of players from Morningside in the off-season and we’ve been watching their progress,” said McClennan.
“They’re playing good footy and it’s good for them.”
The Maggies escaped a danger game last weekend when Surfers let them off the hook.
An animated half-time address from McClennan had its desired effect, but the coach now waits to see if the response continues in yet another tough match.
“After half-time they played the sort of footy we expect,” said McClennan. “The main thing for me is how they respond to things and go about their business.”
Across town at the Grange, things are rosy. The Gorillas have no changes for this match and confidence is high, says football manager Leigh Stevenson.
Stevenson said the club is humming nicely since the appointment of David Martin as coach, but the injection of fresh ideas at the top only adds to the club’s development program put in place five or so years ago.
“Marto has done a great job on the coaching side, but probably a mixture of getting senior players from quality competitions on board, plus natural development of some of our younger guys, is behind it all,” said Stevenson.
Stevenson claimed the Gorillas will go in as underdogs given the match is at Chelmer against a side the Grange have not beaten for many years.
“We’ll have to be at our very best,” he said.

THANKS UMP PHOTO COMP WINNER
"AKA" NOT LIONS ONLY WORRY