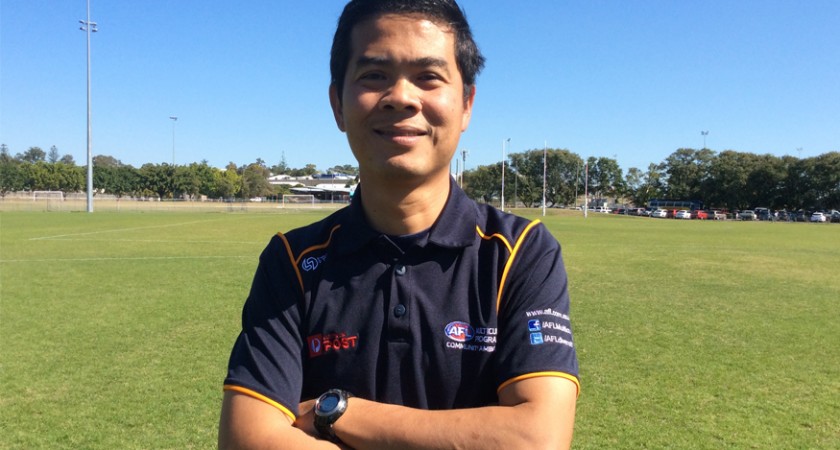 Whether it’s goal umpiring or commentating an AFL game in Vietnamese, multicultural program ambassador Hung Huynh Quang will play a vital part in this weekend’s multicultural round.

Huynh Quang first came to Australia three years ago from Vietnam to complete his PhD studies in Sports Management at Griffith University, and has immersed himself in the Australian rules culture ever since.

His dream is to expose it to children who come from various cultural backgrounds.

Huynh Quang’s involvement in the game began a short three months after his arrival, when AFL Queensland launched a campaign seeking community umpires.

“AFL Queensland ran a campaign to recruit community umpires in Griffith University and I was extremely interested in this and registered to take part,” he said.

Huynh Quang said that coming from Southeast Asia, he had limited knowledge of the game, and that while people in Vietnam love to watch sport, there are limited opportunities for them to get involved and participate.

“The most popular sport in Vietnam is soccer and most people are unable to distinguish between NRL, Rugby Union and AFL,” he said.

“Vietnamese people love playing and watching sports, but they don’t have many facilities and venues to play.”

Since his arrival in Queensland, Huynh Quang’s eyes have been opened to the wide world of sport, and he has taken a particular liking to AFL.

After just three training sessions with AFL Queensland, Huynh Quang was given the opportunity to take to the field as a goal umpire.

Three years later, he hasn’t looked back. He said that getting involved has been a thrilling experience for him.

“It was an absolutely stunning experience for me getting involved in the most popular game in Australia,” he said.

Huynh Quang may have struck up his involvement as a hobby, but he is now interested in furthering his career in AFL Queensland and he wishes to continue to move up the umpiring ranks.

“During my wonderful three years, I have officiated plenty of matches and last year, I was appointed for undertaking the final round and the grand final match of one division competition of AFLQ,” he said.

His love of the sport however, goes further than personal involvement.

Huynh Quang hopes that with his help, AFL can spread throughout schools and communities of children who come from various cultural backgrounds.

“I want to encourage more children with multicultural backgrounds to participate in AFL,” he said.

“My target is to get more and more children, particularly Asian children, watching, and playing AFL.”

To help in his quest, Huynh Quang distributed 50 tickets to this weekends Brisbane Lions vs. Gold Coast SUNS clash amongst schools where the majority of children come from an Asian background.

He is hoping that these children will turn up to the game on the weekend and have the same eye opening experience as he did when he first arrived in Queensland.

As if he wasn’t busy enough already, this weekend’s Q Clash will be a special day for Huynh Quang, who will be commentating the game in Vietnamese.

“I am very proud to have been appointed as a commentator for the game in the multicultural round between Brisbane Lions vs. Gold Coast SUNS this weekend,” he said.

“I will be commentating the game in my own language, and I am very proud to do so.”

This weekend will mark a momentous occasion for everyone involved in AFL, and it appears that there will be a number of fresh little faces in the crowd.

“I do believe that the game and the multicultural round will lead to more children with other cultural backgrounds engaging in AFL,” Huynh Quang said.

Through the work of Hung Huynh Quang and many others in growing our great game, the AFL will have a brand new crop of enthusiastic young athletes in the near future.