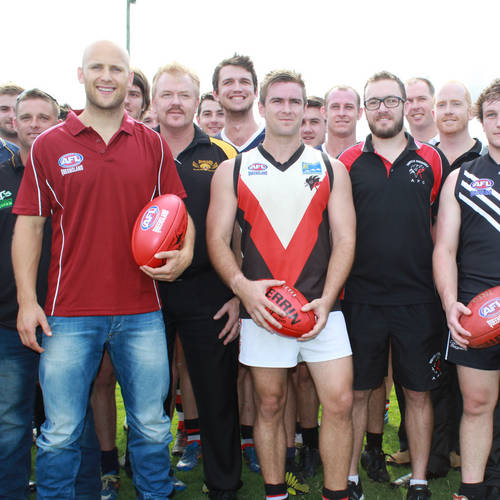 AFLQ Community Football Ambassador, Gary Ablett, runs his eyes over the Queensland comps as finals near.

It’s been a cracking season of community footy so far and there’s plenty more where that came from.
There a plenty of teams still well in contention for their respective flags, after a tight first half of the season.
Footy is unpredictable, and with a lot of teams on the up, you never know who will be playing for the flag in September.
Here’s a quick snapshot of where the competitions sit heading into the last few weeks of the home and away season.

The Palm Beach Currumbin Lions firmed as flag favourites to the midpoint of the Allied Pickfords Cup season. Having dropped only one game, to Wilston Grange, and beating the previously undefeated Springwood Pumas, the Lions are the benchmark of the comp. The Pumas have looked strong, and with a good backend draw, will still be favoured to go deep into the finals. Wilston Grange and Surfers are fighting it out for third and fourth, while the fifth finals spot is well and truly up for grabs. Defending premiers Western Magpies and Mayne Tigers are within reach of that precious final spot and will have to be on their games to stay in contention. Maroochydore and Coolangatta sit on three wins, while Noosa and UQ are one more game back. Burleigh is still searching for a drought-breaking win, with five rounds to go.

After 14 rounds, North Cairns Tigers are a game clear on top, with the Cairns Saints and Port Douglas Crocs hot on their heels. The Tigers will be wary of the second-placed Saints in the back half of the year, with the defending premiers the only side to get the better of the Tigers this season. After an injury-marred start to the season, the Saints, have really hit their straps and will take plenty of confidence in the home stretch to September. Their scoring ability is also well known, with the best goal kicker in the competition by a mile in their side, in Matthew Walsh. Walsh has kicked 54 goals this season, 24 more than the next best, Port Douglas’ Adam Boone. The Port Douglas Crocs are well-entrenched in the top three, with a 9-2 record and only percentage separating them from second. The Manunda Hawks and Centrals Trinity Beach Bulldogs are jostling for the final spot in the top four, both sitting on four wins. The South Cairns Cutters and Cairns City round out the ladder, but have proved competitive against the other sides this season.

Boyne Island Tannum Saints are shaping up as flag favourites in the Capricornia region, a game clear on top of the table. Yeppoon is in second, with only two losses this season, while Glenmore sits a game back in third. Gladstone and the Panthers are neck and neck, with three wins a piece, while Brothers are still searching for their first win, after nine rounds.

Coolaroo loom as the Downs premiership favourites after 13 rounds, still undefeated. Last year’s grand finalists, University are just behind, having only dropped their clash with the Roos this season. Their 2012 grand final opponents, the Tigers, are two games back in third, but both are well in the finals frame. Last year’s wooden spooners, Goondiwindi, have been the biggest improvers this season, sitting in fifth. . Early season leaders, the Warwick Redbacks, find themselves just out of the five, sitting in sixth. In their first season in the competition, South Burnett has been very competitive, forcing sides to bring their A-game each week. Fellow first-years, Chinchilla, have shown plenty of potential when they are able to field a full-strength side.

After 13 rounds, the Eastern Swans sit on top as the only undefeated side in the Mackay competition. Mackay City is two games behind, with nine wins, three games clear of third-placed Moranbah Bulldogs. The Swans’ Grant Raymond is the competition’s leading goal kicker, with 46 majors so far this season.

The Hermit Park Tigers sit on top of the North Queensland ladder, with 42 points and a game in hand over second-placed Thuringowa Bulldogs. The Bulldogs and Tigers are hot favourites for the decider, after a thrilling clash when they last met, decided by an after the siren goal. Curra Swans sit in third place, four games off the pace, with five wins. The University Hawks have been slow to start, but should improve as the season continues, while the Townsville City Lions managed two straight wins, after failing to taste victory in the first nine rounds of the season, but have been challenged in recent weeks.

It’s neck and neck in the Wide Bay competition, with ten games played. The Hervey Bombers and Across The Waves have 7-3 records, with only percentage keeping the Bombers on top. Brothers Bulldogs and Bay Power are battling to stay off the bottom of the ladder, and with a number of their players returning from injury in the closing stages of the season, you can expect the Wide bay comp to really heat up as finals near.

With plenty of quality footy still to play, a lot of the competitions are wide open.
I’ll be back around finals to look at who has made the cut.