Friends lure Panther back into fold 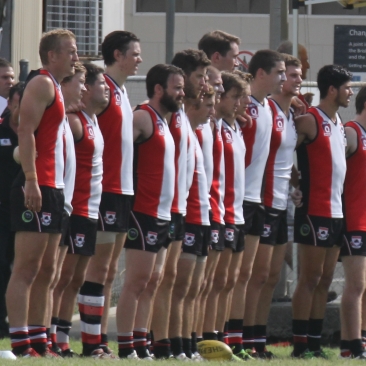 Football is about mates.

Those mates you win a premiership with, the ones you played your first game of Auskick, junior, senior footy with, the mates you are see through the highs and the lows.

And it’s Hayden Wilson’s mates that have drawn him back to Morningside, and out of retirement for the second time.

Watching on as players like Panthers captain Paul Shelton – who played more than 200 junior games with Wilson-, ran around in the QAFL, the 30 year-old said he couldn’t resist returning one more time.

“He asked me to think about it and I suppose watching him run around doing well, I thought we’re the same age, I’ve probably still got it in my legs.”

Shelton and Wilson’s football journeys have been inextricably linked for almost a quarter of a century, and almost all of it has occurred down at Jack Esplen Oval.

Wilson spent a season in WA, Shelton some time at Hawthorn in the AFL, but both have returned to the club where they started, with plenty of the same faces around them.

They’ve shared plenty of memories together, but of his most recent comeback, Shelton’s account differs to his good friend’s.

“After the Broadbeach game (in round two), he sent me a text and said he could’ve kicked 10 out there,” he said.

They represented the state in U12, U15 and U18 teams, traded junior best and fairests as they climbed the Panthers’ junior rungs, and Shelton said there was one memory that stuck out in their junior days.

“He made All-Australian in U15 schoolboys and that was certainly a highlight being a good mate and he was with some super players.

“We’ve played that many games together; I know what he’s going to do every time.”

Wilson said the whole atmosphere of the club had changed in 2014, as the club entered the QAFL, and the opportunity to be a part of that was irresistible.

“It’s back to the days which I remember in the mid-2000s. It feels like that same vibe,” he said.

Both players are dual premiership players with the Panther and hold out hope of gleaning a third together, and with the rest of a tight knit group.

“I’ve got a lot of life-long friends from the club. I’ve been playing there for 25 years,” he said,

“It’s a second home. It’s not just the players, I love going down there and talking to the volunteers, I missed that side of it as well.”

Wilson might have to wait a few weeks, but his goal is to crack he senior side and be a part of any 2014 success.