If you’re looking to whet your finals appetite a month early, look no further. It doesn’t get much bigger than one v two.

If you kick 100 points in a game, you would be pretty stiff not to get the four points.

I’m not so sure that is the case this week though. The way these two teams move the footy meaning it’s going to be raining goals.

Mt Gravatt have to take away the short kicking game of the Lions, while the Palm Beach have to cut off that link up handball out wide the Vultures love to use.

The GPS data on the boys will be through the roof. Players will be running around like there are coals on the ground.

Then you look at the individual aspect of it… mouth-watering.

Derrick to Carbone, McNeven on Moncur, Emblem on Crawley at one end, while Croad and Smith go head-to-head in the ruck, and Tronc and Hart take on Douglas and Stubbs. The list goes on and on.

The carrot being dangled for the Lions is another step towards top spot if they win.

If the Vultures get up, it will be hard to move them from a double chance.

Where it will be one: the runners. 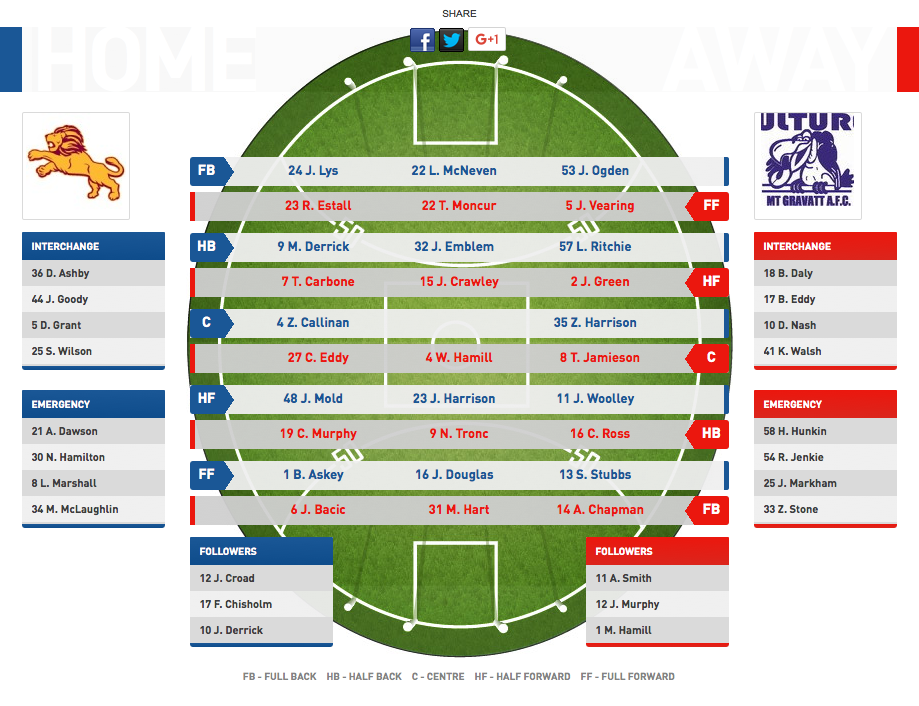 While on the topic of mini-finals, how does three v four sound?

Last time they met, Surfers demolished the Tigers. It rattled them. Now they want revenge.

The biggest headache Surfers has is stopping the three talls in the Labrador forward line.

We know that when the Demons have beaten teams, it’s been their ability to get numbers back deep, or force a turnover in the middle, but if the Tigers can move it quick, through the run of Clark and Hicks, they don’t have the size to defend.

Having said that, Labrador didn’t handle the pressure around the ball last time, Surfers choked them out of it.

They have been more composed, and hunted the ball a lot more of late. I think they know what to expect this time.

Surfers will make this as chaotic on transition as possible. They will all just take off.

If they can get it into Dan Green quickly, with Filewood and Corbett at his feet, they will kick a winning score; there’s no two ways about that.

Sitting at three and four on the ladder at the moment, the winner takes third, the loser can drop as low as sixth. The ramifications are huge.

There is also a little bit extra on the line for the Tigers this week when they farewell a legend.

Two time Grogan Medalist, and premiership captain, Ryan Davey will play his last game in the yellow and black tomorrow, before he heads off overseas to live.

You’d think they find an extra gear when the going gets tough for him, like he has done for the club time and time again.

Where it will be won: transition. 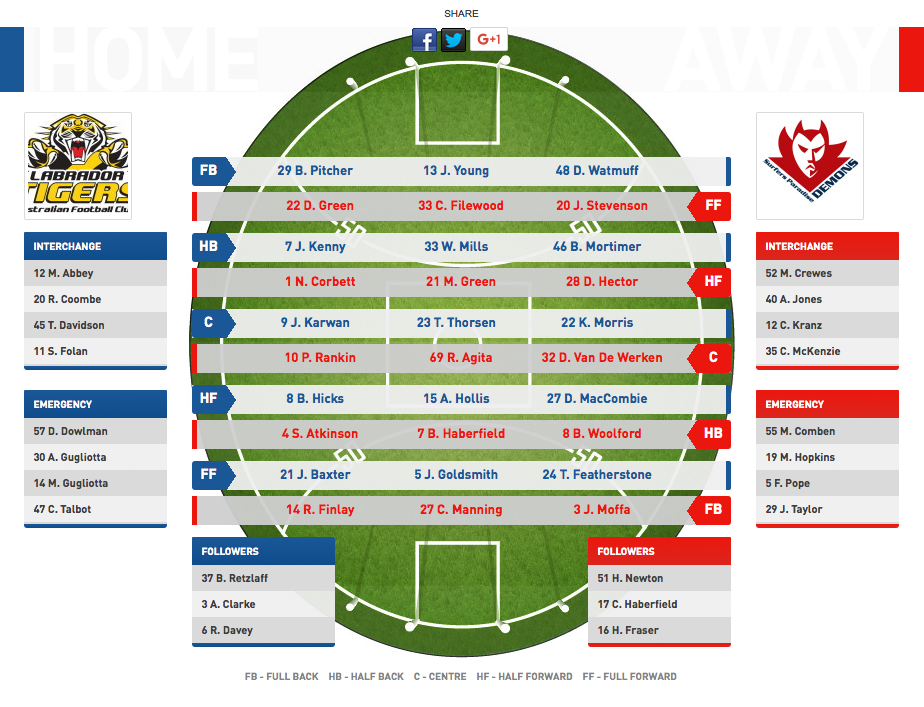 The boys are back in town… well most of them anyway.

That’s as good of an inclusion list as we have seen all year. Not only does it increase the top end class of the team, but the bottom six players also become a lot stronger.

This is a tricky game for the Siders though. The Red Lions close out a year as well as anyone. They can empty out the tank in the next month.

Expect to see the momentum coming out of the backline from both.

They love to set up their run from the back 50, love to link up, and love to get it in quick.

Coincidence they play so similarly? I’ll leave that one up to you.

No Ballenden up forward for the Red Lions due to a Lions NEAFL call up means Tagell will shoulder most of the load. He will have Frame or Buntain to deal with for most of the day.

No doubt some of these names will be slightly underdone, because match fitness is a whole different kettle of fish, so UQ need to try and torch them on transition running.

But I think Nash and Kinch will be two of the happiest people in Queensland this week, with some big bodies in to help them with the contested ball.

Bisset will also come in for his debut, to help with the ruck load after O’Donnell got the Redland callback.

With those names back, Morningside will be hard to stop tomorrow. It won’t just be a win they are looking for though.

With percentage going to play a huge part n the final make up of the top five, they need to put the foot to the floor.

Where it will be won: spread

With just the five wins between these two sides, they both smell blood in the water.

It’s a game both the Hawks and Gorillas see as winnable, which means we are in for a cracker.

It will be ferocious around the footy; there is your KPI for the match.

At times, both have struggled to put a competitive score on the board, but both forward lines will get a good look at it this week.

It’ll be a shootout between Williams and Trewhella up one end, and Liam Rutledge and Fabian at the other.

Both welcome back their starting ruckmen, in Foster and Gray, which will be a good battle around the ground.

The key though is in the middle.

You know Overington is going to have his 25-30 touches, so it’s about guys like Daye and the skipper Fuller being a real influence for the Hawks.

If the Gorillas can start the better, they will run out the game. The Hawks have to be up at half time, by at least three goals.

Where it will be won: contested ball 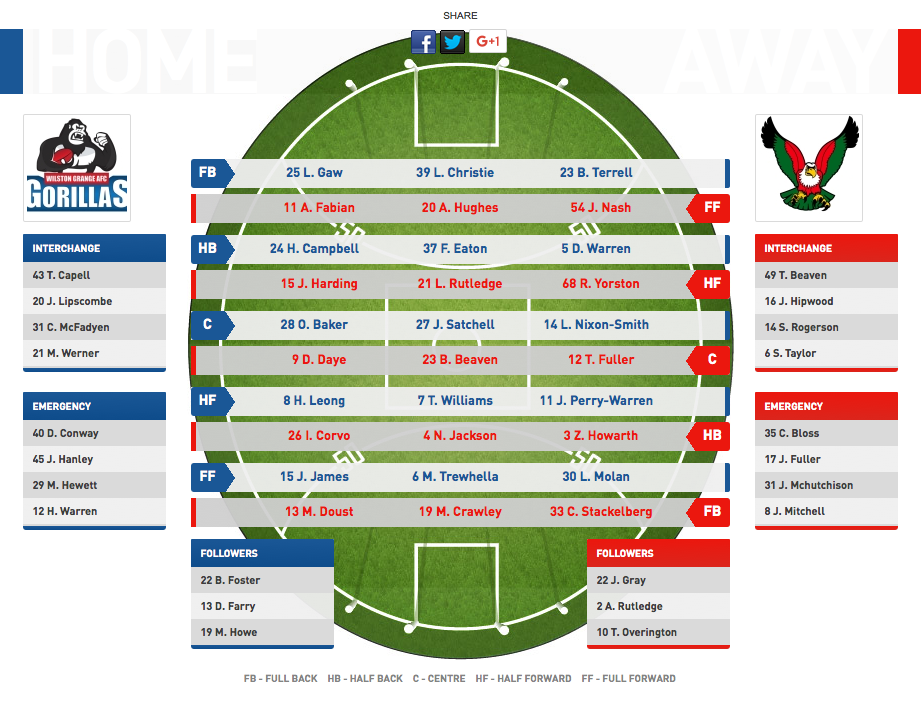 Anyone who thinks this will be in a walk in the park should probably think again.

Can I remind you of Broadbeach knocking off Labrador last year in the run home?

No, they aren’t as strong as they were in 2015, but the Cats are getting better every single week. They can’t be taken lightly.

While they are on the improve, it would take something special this week, because the Magpies are as big of flag chance as anyone right now.

They didn’t get the win last start, but to even be in the game at the end, after not kicking a goal against Labrador in the first half shows the resilience of that group.

The Cats will have to stop the inside work of Carseldine, Crawford and Mitchell.

It’ll fall on the shoulders of Searl, the Darcy Dienjes, and Sharp. It’s going to be a big afternoon for those lads.

If the Cats can get on top there, their spread will be vital to kicking a score. If they don’t get the ball zipping around, the Magpies will load up from behind the footy, and charge forward.

Keep an eye on Brady Allen getting dangerous around the forward arc. He has got a piercing boot on him. Dangerous from 55 off a step.

Dickfos comes back into the Magpies’ lineup, but there is no sign of Brent Staker, who sprained an ankle last game.

The Cats have maintained a real stability in the team the last few games. They are getting very familiar with each other, which was a rarity two months ago.

If Strong can clunk a few, and Royes can take a couple of intercept marks, they will be in it.

Don’t see the Magpies letting this slip though.

Where it will be won: spread

In Round 6 of the 1954 QANFL season a double-header was played at Perry Park.  In the late game, Windsor took on Mayne in a match reminiscent of old times when a fierce brawl erupted just after half-time.  Wild punches were thrown and reportedly several players were also kicked.  The Courier-Mail reported that “for the rest of the match players crashed into each other and
did not worry about the ball”.  Windsor won the game by 25 points.

However history was made in the early game that day when the much-improved Morningside team broke through for their first-ever victory in the top flight with a six-point triumph over Wilston-Grange.  The points total of 76 to 70 was an exact reversal of the scores the previous time the teams had met, late in 1953 at Emerson Park when tempers had become frayed.

The result followed nineteen successive losses for Morningside since their readmittance to the premiership in 1953, and another forty, including three forfeits, endured by the Morningside team of 1948-50.

Remember, 24 hours after the game, match replays will be available to view HERE. No excuses not to be all over the ins and outs of the QAFL in 2016.

QWAFL Round 12 preview
QFA Matches of the Round