Fledgling club on the rise 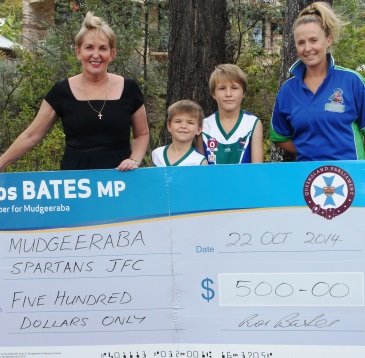 The Mudgeeraba Spartans are looking to be bigger and better, after their first season in the Gold Coast Juniors competition.

In their inaugural year, the Spartans gained 25 members and AFL Gold Coast development coordinator, Tim Searl, has worked with local MPs and the local community to continue that growth into 2015 and beyond.

Bates presented the club with a $500 cheque to help purchase equipment for the club last month, while the Spartans received $800 from Tozer, as their divisional councillor.

Current club treasurer, Adam Purss, has bee working on grant applications for the club and said the Spartans had a clear plan for any funds they received.

“We want to build our bank of equipment and do  a fair bit of promotion of the club in various ways, shapes and forms to grow the local interest and participation,” he said.

Purss said the response from the local community to the new club had been overwhelmingly positive, and the Spartans’ doors were open to anyone who wants to be involved.

“We’re looking  to get as many  kids participating as possible and  generate some support from local business,”he said.

“We and really need to get some more volunteers from parents of kids anyone else who may want to be involved to help.”

The Spartans held their first AGM on Thursday November 6.