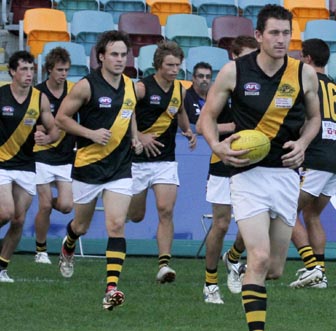 The fight for the places in the QAFL top five is complete, despite one game remaining in Round 18 today.

The Redland-Morningside clash at Victoria Point is now a 2010 swansong for the Bombers, who cannot overhaul the fifth-placed NT Thunder on percentage.

Southport will host Morningside in the qualifying final at Fankhauser Reserve next weekend for the right to play minor premiers Labrador the following week.

The Thunder will make their debut finals appearance when they contest the sudden-death elimination final against Mt Gravatt in Brisbane next weekend.

The venues and days will not be confirmed by QAFL Operations Manager Martin King until after the final game has been completed in the Redlands at 5pm this afternoon.

The Thunder guaranteed fifth place with a thumping 142-point win over Broadbeach in Darwin yesterday.

Cleve Hughes has won the Ray Hughson Medal for most goals in 2010 with his three majors at Graham Road taking him to 74 for the season, two more than Thunder star Darren Ewing, who notched eight in the demolition of the Cats.

Surprise packets Labrador, who finished seventh in 2009, topped the table for the first time.