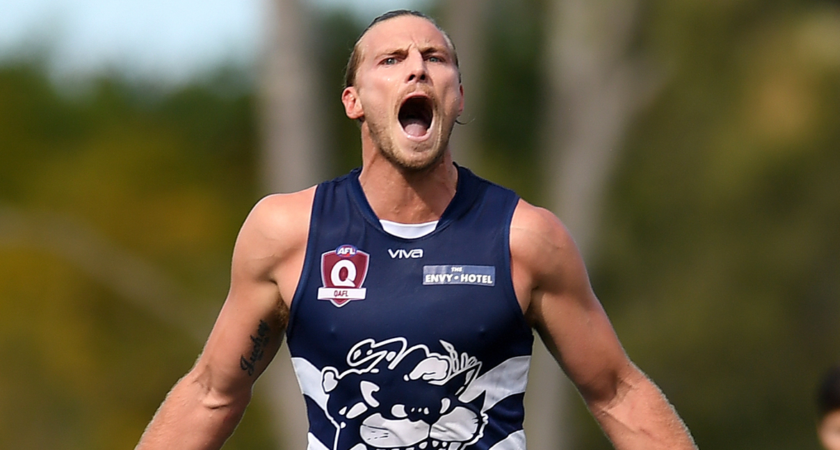 The Vultures crashed 13.18 (96) to 11.7 (73) and now face a moment of truth when they travel across Brisbane to play Western Magpies in a finals-shaper clash at McCarthy Homes Oval.

This is a fixture that will almost certainly decide the fate of both teams in regards to finals participation, with Mt Gravatt currently holding down fifth spot, a win and percentage clear of the Magpies with two matches left.

Although Saturday’s final margin was only 23 points, Surfers certainly deserved to score by much more. Thirty-one scoring shots to 18 was evidence of the superiority of the Gold Coast team.

Stats show that Mt Gravatt kicked three of the last four goals of the game to reduce the deficit, but that merely masked the superiority the Demons had over their rivals but could not put them away.

“It felt like we were playing good footy and as I said at half-time it was like we were dangling a carrot in front of them and keeping them in the game,” said Surfers coach Brad Moore.

“We said we need to make more of our opportunities because, again, we were  getting opportunities to kick goals but not kicking accurately enough.

“We had thirty-odd scoring shots so we could have won by a lot more. We didn’t but it’s a matter of being able to get those shots on goal.

“I thought it was a good four-quarter performance again and I think the boys have hit really some good form the last month after our flat spot in the middle of the year.”

The return of offensive siblings Dan and Matt Green did wonders for the Surfers attack with Matt kicking 4.0 and Dan 2.1.

“Put Dan and Matt back into our forward structure and it changes the dynamics,” noted Moore.

Especially pleasing for the Dees was the effort of back-up ruckman Thompson Smith who worked in well with Harris Newton against the much bigger Mt Gravatt pair of Andrew Smith and Jarrod Huddy.

Smith has come from nowhere this year – he was playing reserves not too long ago – and it was a chat with Moore than spurred Smith on.

“He was a guy who was always thereabouts but was always a bit hesitant (when given a run in seniors,” said Moore.

“He dominates in reserves game and now, to have him and Harris Newton playing well, it’s good for us.”

Mt Gravatt coach Adam Boon conceded the Demons dominated his side in the middle and at contests around the ground.

“We were outworked through the midfield and outworked at the contests and we couldn’t move the ball the way we wanted to.

“Surfers defended the ground really well and they slowed us up – and they got us on the spread.

“The scoreboard flattered us a bit, I think.”

Surfers had winners everywhere, none better than Jack Prestegar and Brody Haberfield at the back, Smith in the ruck, Nick Scott in defence and Matt Green up front.

Best for Mt Gravatt was youngster Tom Matthews, key position Jonah Licht who started in defence but was thrown forward late, spearhead and midfielder Sam Stubbs and another youngster in Tarj Townson.

Next weekend, when Mt Gravatt travel to the Magpies, Surfers have a huge game against premiers Palm Beach Currumbin at Sir Bruce Small Park.

Morningside come from behind to win again

Some magical magnetic board moves from the Morningside coaching staff has worked wonders for a second time this season – producing another comeback miracle for the Panthers.

A few weeks ago the Panthers came back from a 50-point deficit at quarter-time to beat Mt Gravatt.

On Saturday it was much the same when the Panthers, playing Labrador at Jack Esplen Oval, overturned a 30-point half-time deficit into what was eventually a convincing victory.

Morningside took the game by 14.21 (105) to 10.10 (70) and it was a grateful, and relieved, coach Clint Watts who later spoke of what went on during the half-time break that transformed the home side.

“We just threw some magnets around (players positions on the field) and in the end it was another big comeback for us,” said Watts.

“Before the game we tried to take the loads off a few guys but we ended up having to put them back where they usually start.

“Like the Mt Gravatt game we just had to chip away, just grind and grind and grind.”
In the third quarter the Panthers went on the prowl and the Tigers choked badly.

A total of 15 scoring shots (for 8.7) to two behinds from the visitors for the term said it all as the momentum swung heavily to the home side.

The Panthers won third-term clearances by 30-8 and Watts said this term was the best quarter his side had played all season.

Ruck pair Brad Hodge and Peter Mollison were outstanding for Morningside and Labrador coach Liam Burke said those two – as well as in-and-under Jimmy Rayner – were responsible for the turnaround.

“We tried a few things to close them down but we couldn’t stop them,” said Burke of the second-half collapse.

Veteran Wayde Mills, Grogan Medallist in 2017 and who is playing out his career as a forward, kicked three goals for the Tigers and was named their best.

While Morningside held on to fourth spot on the ladder – level on points with Broadbeach and Surfers Paradise – Labrador remain seventh, a win behind fifth-placed Mt Gravatt, heading into the final two rounds.

The Tigers have a must-win match against Sandgate at Cooke-Murphy Oval next weekend when Morningside host Wilston Grange.

Premiers Palm Beach Currumbin survived a torrid physical test of character when they took the points against Wilston Grange at Hickey Park on Saturday.

In an at-times fiery clash Palm Beach took the points by 14.12 (96) to 4.9 (33) and maintained their unbeaten record as they chase a third successive premiership.

But it was far from smooth sailing as the Gorillas did everything to put the red hot favourites off their game.

It was, as Grange coach Barry O’Brien said, a case of both teams giving as much as they received.

At quarter-time, as has been the case too often this season, the Grange were right in it, trailing by a point.

But after that they managed to put only 2.8 on the scoreboard as the Lions piled on 12.10 for their final 63-point margin.

“And coming out of the back half you can’t turn the ball over against sides like Palm Beach.”

For the Gorillas Aspley rookie-listed Jack Tomkinson was solid in a variety of positions around the ground.

PBC coach Jess Sinclair said the Grange were good in the first quarter but were worn down when the fitness of the reigning champions told after half-time.

In the continued absence of spearhead Jack Anthony, PBC used regular defender Jackson Emblem at full-forward and the veteran responded with four goals and as many behinds.

Half-forward Alex Dawson produced some form at the right time, as finals time nears, Nick Crowley was his usual productive self in the centre and Callum McBurnie provided plenty of spark from the half-back line.

Over the last two rounds PBC will get some ideal pre-finals workouts with away matches against Surfers Paradise and Broadbeach.

Skipper Matt Fowler bounced back to form with a big attacking effort when Broadbeach downed Sandgate at Lemke Road Oval on Saturday.

“Chook had about 15 scoring shots and probably should have kicked a lot more goals because he hit the posts four times,” said Broadbeach coach Beau Zorko.

Jason Cloke (3), Benji Neal (3) and Hapeo Bobogi (3) were all prominent on the scoring list as the Cats boasted 10 individual goalkickers.

Zorko said Sandgate started as he expected them too, bringing their young legs and enthusiasm into the game straight away.

“They probably out-enthused us a bit but from quarter-time on we controlled the game,” he said.

Starring for the Cats in his roles on-ball and up forward was Southport-listed Jake Hinds. The left-footer from Tasmania could well be the finals ace in the pack for the Cats the way he has been playing.

So could quality act Jackson Fisher who continues to stand out with his skills in close.

On-ballers Benji Neal and Jayden Rymer and ruckman Luke Dempsey-Ceh were others to go well for the Cats.

Sandgate had plenty of spirit but simply lack the maturity needed to turn promise into the real deal.

“Broadbeach had too many big bodies and we had a lot of kids in again,” lamented coach Jarad Marsh.

“We had two players aged over 21 in our side on Saturday.”

Rising Star Award nominee Tahj Abberley was good on a wing, Jordan Harding was strong in the midfield and Josh Preval did okay on ex-Collingwood forward Jason Coke.

“Keeping Cloke to three goals was not too bad considering the number of (50m) entries they had,” said Marsh.