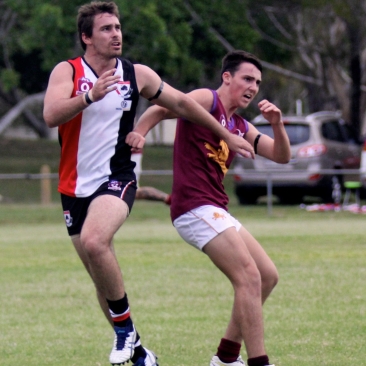 The final 25 players to represent the QAFL on Sunday have been named, after a final training session.

After three weeks of training, the initial 35-man squad was officially trimmed down tonight.

Morningside’s Paul Shelton will captain the team on Sunday, one of 11 Panthers in the final team, while Wilston Grange supplied four representatives, in Ben Haire, Matt Trewhella, Steve Brittain and Jim McMahon.

Palm Beach both have three representatives in the final 25,with Brock Askey, Matthew Bilton and Matthew Derrick, while Surfers Paradise, Labrador and Broadbeach have two in the side.

Mt Gravatt’s Adam Boon is the sole representative from the Vultures.

There won’t be anyone thrown in the deep end on Sunday, with QAFL coach, Steve Daniel saying players were picked in the positions they suit best.

“We picked players in the positions they find very familiar to themselves rather than picking someone for the sake of it and playing them out of position.”

Daniel said the expanses of the ground at Burpengary meant the speed of the side was crucial.

“Obviously, we need to have a lot of pace, we need to be pretty quick around the contest. We’re going to be very impressive in that particular area,” he said.

Talent and form were key to selection, but Daniel said the most important characteristic considered was a passion for the state.

“The major emphasis, from the first day we picked the squad was getting players that were really keen to represent Queensland,” he said.

”The most important thing w are looking for is effort and intensity to stay in the game. “

The QAFL v VAFA match kicks off at 2pm on Sunday, headlining the State Triple Header at Burpengary.