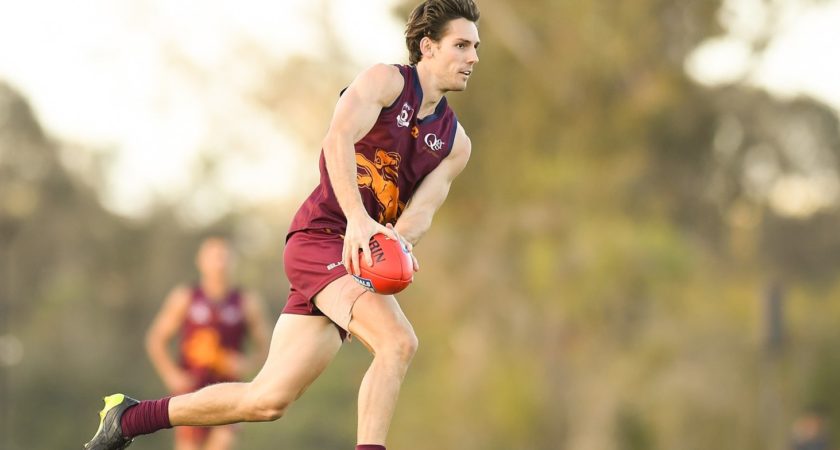 When the final siren sounded in the 2018 QAFL Grand Final, the scenes captured on camera mirrored the same aftermath from the same game one season ago.

Not only did the Lions prevail as the QAFL Premier just as they accomplished in 2017, the ball found its way to Palm Beach Currumbin midfielder Thomas Thynne in the dying seconds of the game.

Against Labrador last season, Thynne was beginning his run up for a set-shot when the siren sounded. And this year, an Adam McKenzie handball allowed Thynne to grip the ball again as the Lions were crowned premiers on the big stage.

On both occasions, Thomas was shadowed by his brother Stephen and the two celebrated together at the game’s end. Moments later, the pair were swarmed by a plethora of their Lions’ teammates, but for a single moment, the brothers were able to once again bask in the moment together.

“I can’t believe it. I had the ball again on the siren and he was right next to me, so I thought how good that is,” Thomas told aflq.com.au after the game.

“Winning one with him is very good but winning two is even better.”

The Thynne brothers represent a larger contingency of family ties within the successful Palm Beach Currumbin side.

Jackson Emblem is a mainstay in the Lions’ defensive 50 and was able to share the moment with brother Blake who played in the reserve Grand Final.

Jed and Zac Harrison, also brothers, lined up for 17 games each for the Lions this season with the latter playing in the side’s senior Premiership.

Elsewhere, ruckman Nick Crowley celebrated the win with his father, Jack, who is an assistant coach with the team while midfield/forward Tyler Cornish was able to do the same with his mum Anne, who is President of the club.

Lions coach Chad Owens shared the occasion with his two children, firstly in the team’s pregame photo before the bounce and following the game, where he embraced the pair before going on stage to receive his Premiership medal.

Following the win that sealed the Lions’ back to back premierships, Owens paid homage to the collective of families that contribute so much to the club and its success.

“It really is just a family club. We’re a family,” Owens said.

“It’s a family. Our motto is local, loyal, family and obviously you have recruits as well, but our local guys are family and makes it such a great club.”