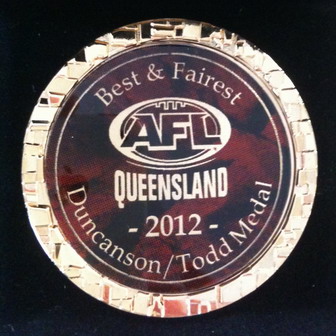 The race for this year’s medal is wide open with some 2012 recruits having made an immediate impact on the competition and previously known vote getters superb again this season.

Having dominated the SEQAFL season this year, the Western Magpies are sure to poll heavily this year. However, with so many quality players will they steal votes from each other?New recruit Anthony Corrie has been an eye-catchingly brilliant booting 71 goals for the season, which is sure to garner him votes from the umpires. Known poller’s Reid Dobson and Val Pope have also shown their quality throughout the season and will be sure to poll votes. Bolters and outside chances for the Magpies are Ben Heffernan Roper who has been a consistent performer through the middle of the ground whilst Chris Mihalopoulos has produced some excitable performances.

Palm Beach have been the other heavyweight of this years SEQAFL and their 13 wins this years, votes in the Duncanson/Todd Medal will ensue.  On-baller Jesse Derrick has been leading from the forefront this season and his ability to kick goals this season will be sure to attract votes. Meanwhile half back flankers Blake Schneider and Angus Munro have provided constant drive and have been prominent performers each week. James Drake is a known vote getter and ace of the competition and could be a smoky chance this year.

Noosa as a collective have always polled well in the Duncanson/Todd Medal and Monday night should prove no different. Winning 11 games for the year, expect to see Noosa players vying for the medal again this year. Although, typically a midfielders award do not discount bustling full forward Danny Brewster who has slotted 66 goals in another dominant season. Rover and last year’s runner up Caleb Isles has had another consistent and dynamic season and will be hoping to go one better this year. His fellow midfielder Tom McKittrick has also been a regular feature in Noosa’s best players and will be an outside chance to take out this year’s award.

The Demons could produce as serious challenger for the Duncanson/Todd medal this year. Full forward and leading goal kicker Korey Fulton has booted 66 goals will most definitely receive some attention from the umpires.  Midfielder Jacob Ryan has also had a lively season whilst outside chances are Jesse Haberfield and Tayler Rolfe who have been reliable performers for the Demons and could feature heavily on Monday night.

Sandgate chances on the night will rest with brilliant centre half-forward Liam Rutledge who had a breakout season for the Hawks. However, a lack of games could hurt his chances. New recruit Patrick Walton has been another standout for the Hawks and could be an outside chance to take the award. Midfielder Benjamin Beaven has been consistent and could poll in numerous matches whilst Samuel Lubke could also be a bolter.

The Gorillas have typically polled well in Duncanson/Todd medal in the past  – will this year be the same? Forward Steve Brittain has been a prominent feature in Gorillas best players and has snared 29 goals for the season.  Brenton Ogle although only having played nine games has produced some brilliant performances that could help him poll heavily. Meanwhile midfielders Cale Agosta and David Tough ball winning ability could earn them the umpire’s votes. Captain Lee Smith was dazzling early on in the season before a broken leg ended his season however expect him to poll well early.

Standouts for Mayne this season have been dynamic onballer/defender Sam Paterson and centre man Adam Stevenson who have both been superbly consistent for the Tigers. The ever-reliable Luke Faulkner will be sure to poll votes with his goal kicking ability a real feature of his game. Whether Mayne has won enough games to ensure a winning vote getter will be the main concern come Monday evening.

Despite a poor winning record this year, Maroochydore have always produced competitive performances, which could result in some surprise umpire votes. Jarrod Raun has been a dynamo this season for the Roos’ and his goal kicking ability will hold him in good stead to poll votes. Jed Turner will be the Roo’s next hope after a magnificent season.  Jarrod Gale ability to win the contested ball throughout the year could help his outside chances.

Springwood’s biggest chance this year will be ruckman Mitch Vasterink who has been a shining light for the Puma’s.  Jacob King, has produced some exciting matches roaming across the forward flank which could earn him some votes. Dylan Witney and Michael Grose could also poll heavily for the pumas however their lack of wins this season will work against them on Monday night.

Burleigh has also had a poor season, which could prove detrimental to their success on Monday night. Matthew O’Brien polled strongly last season and has produced another stellar season for the Bombers. Tim Mckay is another chance whilst Sam Brown has frequently featured in the Bomber’s best.

The mercurial Stanis Susuve will be Coolangatta’s main hope for the award, however the club’s poor season could cost him many potential votes. However, his ability to weave magic off the half back flank will without a doubt catch the eye of voters. Jeremy Cross has also been the reliable performer for the Blues that could earn him some votes.