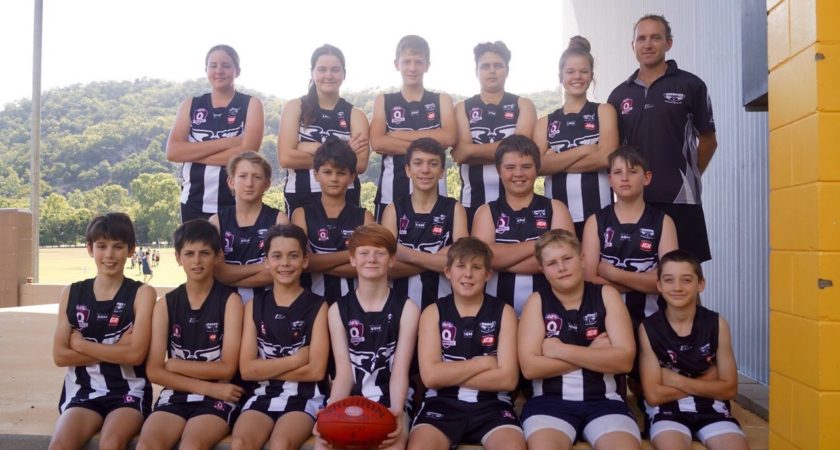 Separated by an ocean and a long country road, the Charters Towers Demons and Magnetic Island Magpies have jumped many hurdles to ensure that footy is the winner.

With neither club having enough players to form a standalone team, the two clubs have entered a combined side in the AFL Townsville Under 13s competition.

The side, who play under the Magpies moniker, has enjoyed a successful season on the field, and are currently running third with a record of six wins and six losses.

Roughly 150km apart, home games are played on Magnetic Island – the former home ground of AFLW star Bri Koenen – meaning the boys from Charters can expect a four-hour return trip for a single game of footy.

The concept was initiated by the Demons, who, unable to fill a side of their own, reached out to the league in the hope of finding a team for the boys.

The Magpies were quick to respond.

“When the Charters Towers Demons approached the league clubs for assistance in providing a team for their Under 13s kids, we immediately invited them to be a part of our team.” Magnetic Island Under 13 head coach, Kane Logan, told aflq.com.au.

“It is a win for both clubs; all kids can play the sport they love; the coaches and managers do not struggle with making a full side on game day.

“It has given confidence to all the players, as they know they have lots of support on the field.”

Allan Georgee, president of the Charters Towers, was appreciative of the support the club had received.

“Charters Towers Demons’ Under 13s have been welcomed by everyone involved with the Magnetic Island Magpies club and truly been made to feel part of the team,” Georgee said.

While the partnership has been a win-win situation, both clubs are looking to field their own team in the Under 13s competition next year.

Georgee is hopeful the boarding schools in the Charters area will allow for that plan to become reality.

“Our aim is to have our own team in 2019 and we look forward to making this a reality with players from across Queensland and the Northern Territory being a part of our club,” he said.

AFL Townsville is proud of the unified efforts of both Magnetic Island and Charters Towers to ensure that every player is provided with the opportunity to play our great game.