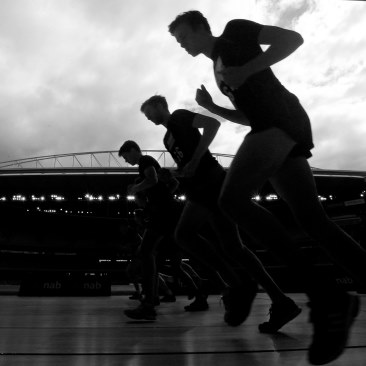 The third day of the combine saw a kicking, clean hands and goal kicking test, followed by the torturous beep test.

Dawson was the standout of the Queenslanders finishing equal second in the clean hands and the goal kicking test.

The Aspley defender finished with a score of 25 out of 30 in the clean hands test, which rates a player’s ability to hit specific targets with handballs, behind five leaders who picked up a score of 26.

His score of 25 out of 30 in the goal kicking test, with players given five shots at goal,  put him second, behind a trio of leaders with perfect scores.

The NT’s Nakia Cockatoo continues to boost his draft stocks, coming off a lengthy foot injury, topping the kicking test, after performing well in both the vertical leaps and speed and agility tests earlier in the week.

The final day of the combine consists of the 3km time trial, with former 800m National champion, Hiscox, expected to perform well once again.

Queensland’s Austin Harris, Will Bella and Bodhi Uwland, who all hail from different parts of the state, have been invited to the 2021 NAB AFL Draft... [more]